What is an extruder machine

Both single and twin screw extruders are devices that are based on the functional principle of the screw conveyor. They press solid to viscous materials under high pressure and usually also at high temperature evenly out of a shaping opening called a mouthpiece, nozzle or die. The process itself is called extrusion.

An extruder basically consists of a screw shaft (also simply called a screw). It is located in a screw cylinder, the inside diameter (nominal diameter) of which roughly corresponds to the outside diameter of the screw. At the front end of the cylinder there is an outlet opening, the so-called nozzle. The screw is mounted at the rear end of the screw cylinder. The drive, which usually consists of an electric motor and a gear unit, is also located here. This is known as an extruder gear and ensures the rotation of the worm shaft. 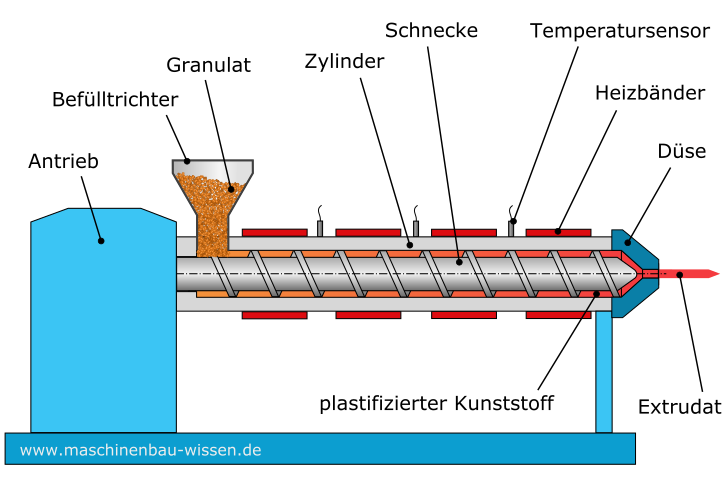 Structure of an extruder

Material feed at the extruder

In most cases, the materials to be processed were fed into the screw via a funnel located at the top of the screw cylinder. It is important here that the components supplied are metered exactly and reproducibly at any time. Depending on how the dosing control mechanism is designed, a distinction is made between volumetric and gravimetric dosing. If further components are required for the production of plastics (such as colorants or masterbatches, anti-aging agents, plasticizers or reinforcing fibers), these can be introduced into the screw cylinder via needle valves or a side feeder, for example.

Zones of the extruder screw

The snail is divided into different zones, each of which has specific tasks. The feed zone is located in the rear part of the screw cylinder. Here the material that is to be extruded is fed in via a funnel. One also speaks of "feeding". Here the plastic is also melted (if it is a thermoplastic) and compressed. The compression zone connects to the feed zone. Here the material is further compacted due to the reduced pitch of the screw. This builds up the pressure that is required for discharge in the tool. Finally, the so-called discharge zone follows. This ensures a homogeneous flow of material to the tool (the nozzle).

Zones of an extruder screw

Temperature control in the extruder

Heating bands are attached to the outside of the screw cylinder. These melt the supplied plastic powder or granulate (plasticize it). Depending on the structure and process, it may be necessary not only to heat the extruder, but also to cool the plasticized plastic it contains. This cooling takes place either via cooling fans or in cooling channels that are incorporated into the screw cylinder. There is a cooling medium in these. This can be water under pressure, for example.

Other important aspects of the extruder structure

Depending on the plastic to be processed, additional equipment may be necessary for the extruder operation. For example, pumps are installed to pump out gases that would otherwise leave bubbles in the end product. The material is also decisive for the shape of the worm shaft. The pitch, the number of turns and the width of the individual screw threads can be completely different depending on the plastic to be processed. In most cases, the extruder in plastics production is followed by other machines (such as calibration or a cooling water bath).

Construction of a complete extrusion plant