Does the radio have a future?

The term radio is changing rapidly. Linear hearing disappears, listeners dictate what they want to hear where and when. How is all of this connected and will we still see radio in ten years' time? As the former head of the SRF beta innovation cell and today's advisor and coach for innovations in the public sector, Dominik Born dares to look into the future.

The fact that the radio industry is changing can be measured on the one hand by how often it has already been declared dead. On the other hand, the change is evident in the vehemence with which some proponents of the medium smile at or slander change. Regardless of the perspective from which the radio scene is viewed, the upheaval is in full swing. But nobody knows the answer to the question of how we will listen to the radio in the future.

In the current situation, it is not very effective to rely only on the modular system of technical possibilities: Whether it will be DAB + or radio streaming in the future, whether it will be actors who read us the news from the refrigerator using audio synthesis, or whether it will be chips implanted in the ear canal - all of this has a lot of “wow” but little “how”.

It takes to find out how and from which providers we will be consuming audio content in ten years' time a little excursion into the history of broadcasting - far away from gadget shows and crazy lectures with confetti effect.

According to Wikipedia, the term radio comes from the Latin "radius" for "beam". Which means that the content that comes out of the devices at home or on the go also «floats» in this beam. And as is well known, this jet has to flow, just like water from the tap.

When in 1922 the first musical tones were heard in Switzerland over the airport radio from the Lausanne transmitter through Roland Pièce, this beam was misused for the first time, but Since then, nothing has changed in that regard: Even today, an audio source is needed that plays a sequence. The signal is propagated and at another end the signal is received and delivered to the ear. 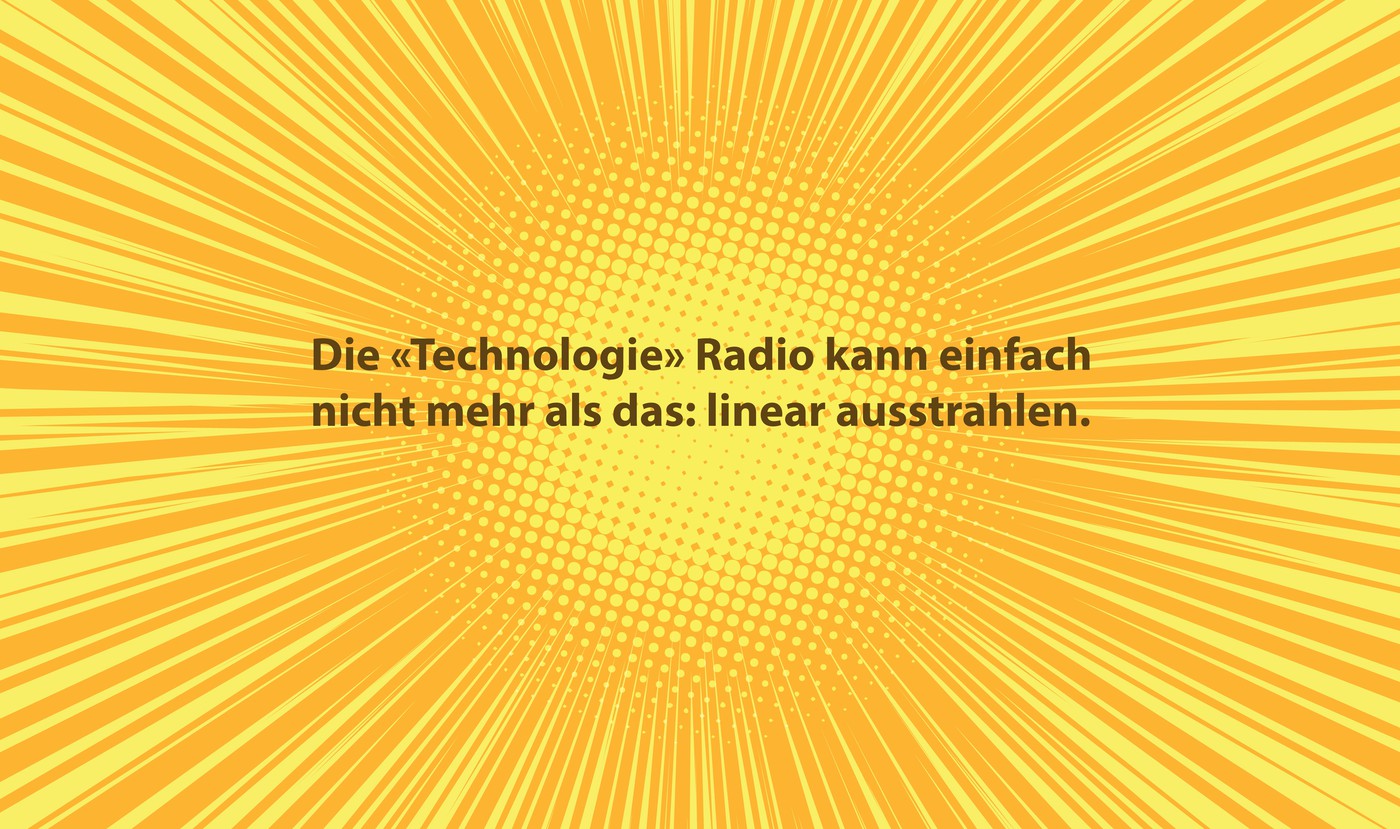 The ray that gave the medium its name remains unchanged. The “technology” of radio simply cannot do more than that: broadcast linearly. And so the program creators are condemned to equip this process. You decide what will be broadcast now and what will be broadcast later. And some topics do not even find their way onto the station. Deciding what is more important now means compromise. This compromise not only leads to internal discussions, but also to feedback from dissatisfied listeners.

With its classic, linear form, traditional radio falls into the “one size fits all” trap, which everyone has never really liked. And yet the technical limitations were accepted over time, also on the recipient side. 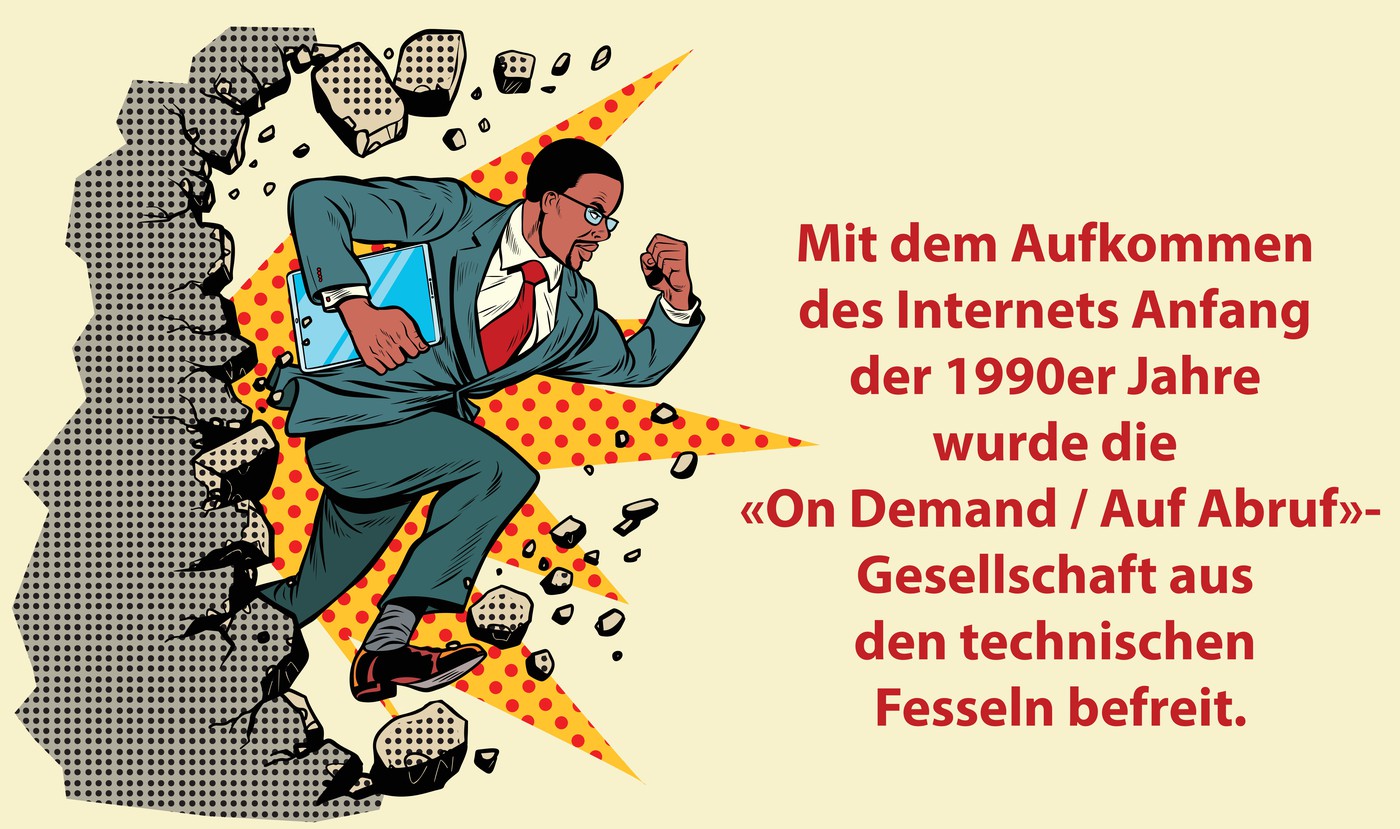 With the advent of the Internet in the early 1990s, the “on demand” society was freed from its technical shackles. Digitization began to push the existing offers up against the wall. The attention span of the people to be reached became shorter and more competitive with every new internet offer. The origin is the technology, but this was only so quickly embraced by society because it covered a basic need for self-determination.

Thales S. Teixeira, author of “Unlocking the Customer Value Chain”, does not describe technology as the decisive changer, but the consumers themselves. By using the new technical possibilities, they first bring about the change - and ultimately lead to success . Teixeira writes: “Many of the fast-growing start-ups such as Uber, Airbnb, Slack, Pinterest and Lyft do not have access to more or better innovative technologies than the established companies in their respective industries. What they have is the ability to build faster and more accurately and deliver what customers want. " 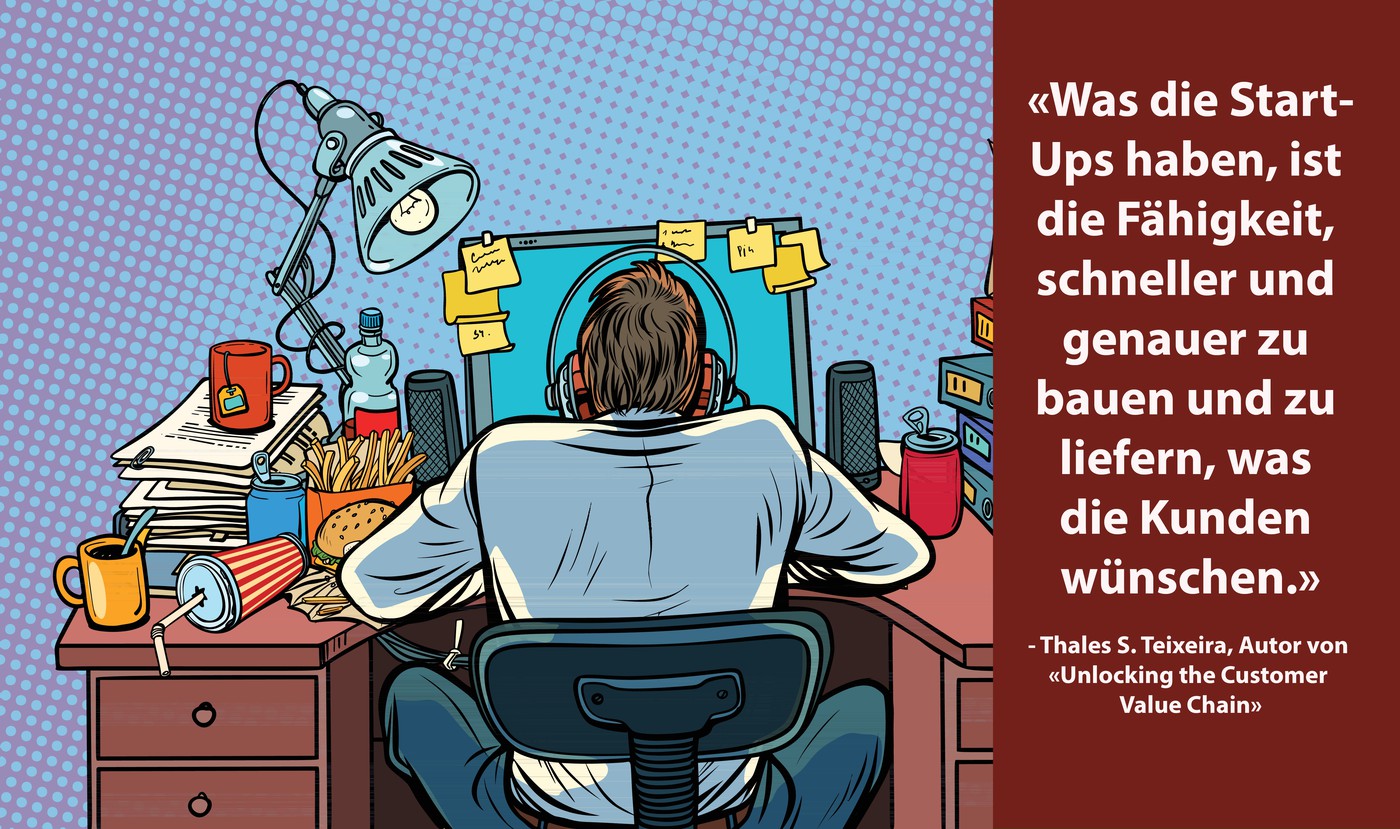 In order to offer people what they want, a global, networked world should also be thought of as global and networked. So think radio from the Internet: The entire value chain no longer has to be covered by each individual radio provider. In contrast to global platforms, a larger media company cannot serve all of them. It has neither the mandate nor the abundance of content or the know-how to do this.

The retail trade serves as an example here: instead of going from one specialist to another, customers, for example, consciously choose the generalist for their purchases. This unites many disciplines under one roof. Specialist shops are only visited by those who have the time and leisure or who value idealism more than efficiency. An opportunity for the specialist shops would therefore be to remain a value-generating part with the wholesalers, in order to remain in the symbol. On almost every major platform (YouTube as an example for video content, Spotify for audio content) there are those who make the platform valuable and those who pay for it. Anyone who wants to earn money there - be it in the form of money or attention, which is considered a coveted currency today - should either look for the gaps that exist on these platforms and then fill them with their content, or they create for their content offer its own small platform and tries to reach its clientele from there. Or when it comes to the radio: its listeners. 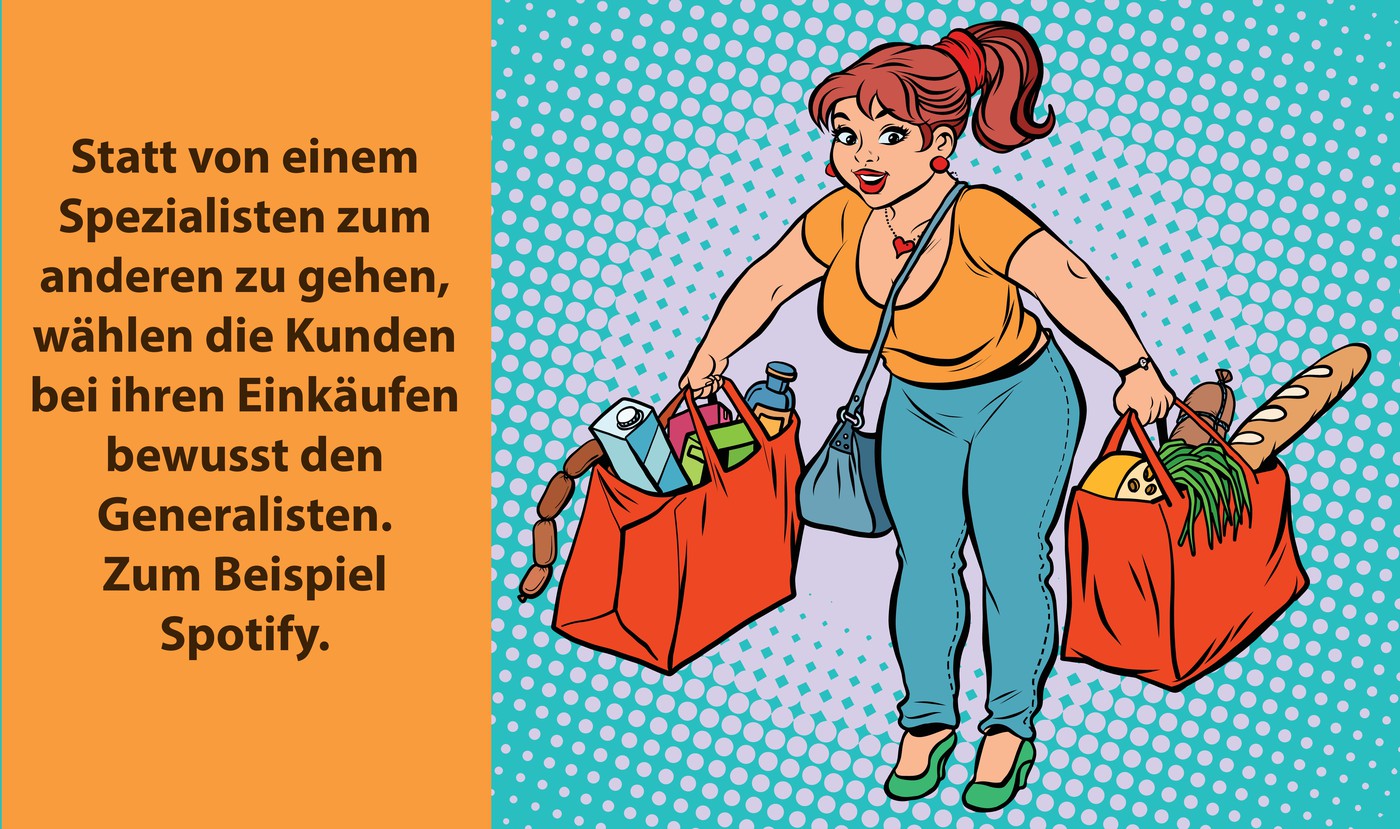 The globalization of content then creates an even greater challenge: In order to hear content, immense media libraries have to be searched. This selection is still tedious and frustrates many users. According to various scientific studies, customers are more satisfied with a reduced selection than with an oversupply.

But what is the correct audio content and for whom? This problem plays into the cards for radio nostalgics: “The listeners don't want to have to choose all the time, they are happy to leave the selection to us” - Here, however, a problem is declared a virtue and patronizing is sold as a service. The problem could be completely solved by design and cleverly programmed algorithms. This is also confirmed by the surge in platforms such as Spotify, Netflix and YouTube. Your offer is huge and the personalized suggestions for further suitable content are not yet working perfectly, but whole evenings can be filled. 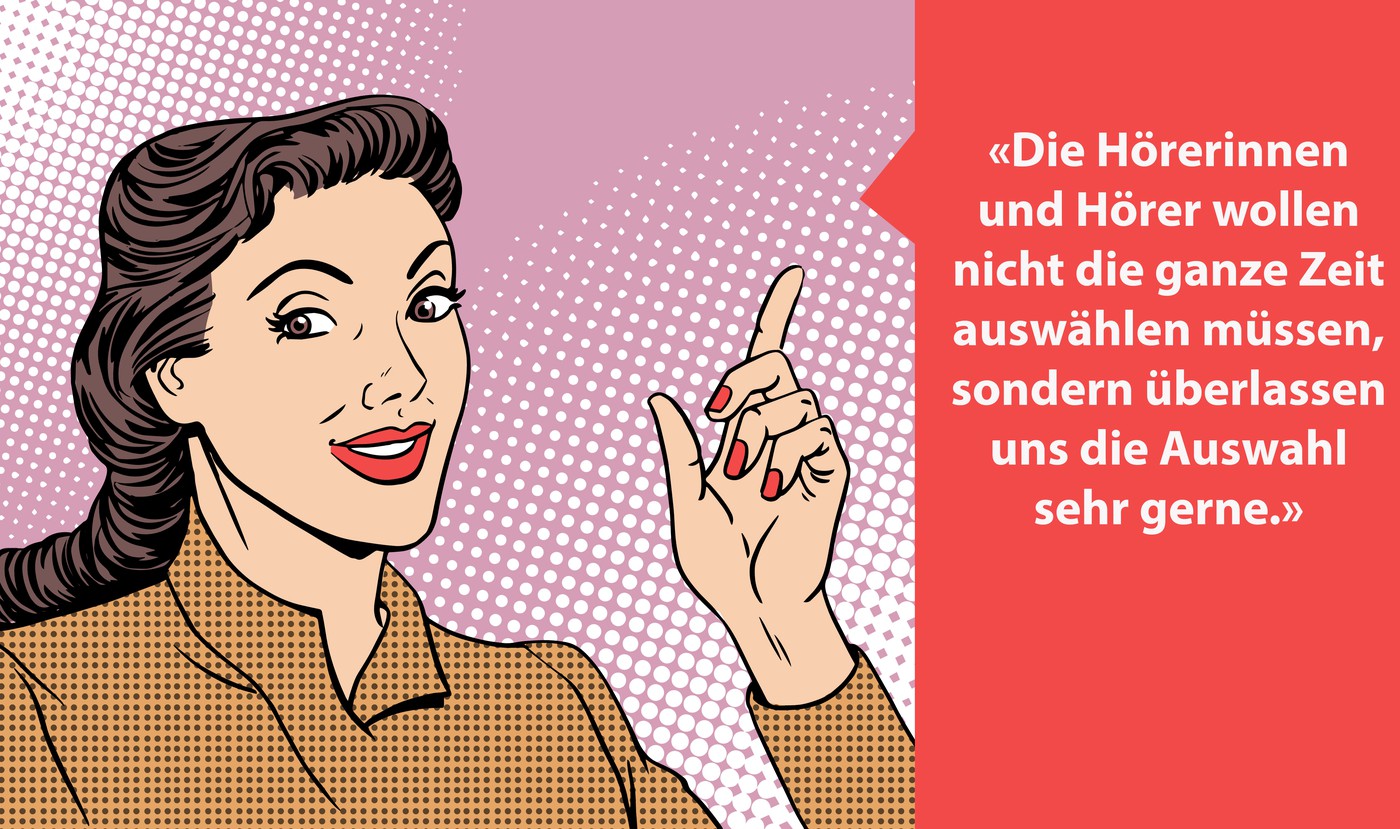 Two “wholesalers” took a further step towards an individualized audio offer: Amazon and Google: With the development of the Amazon Echo and Google Home smart speakers, an acoustic interface was created that is controlled by pure shouting. Not only a blessing for people who cannot or can no longer read, but also for people who do not have their hands free or who have to look out onto the street. In those countries in which the smartspeakers and their software are officially available in stores, changes in usage are already significantly noticeable. According to the “Smart Audio Study” by NPR and Edison Research in the USA, the smartspeaker replaced traditional radio as early as 2017 for 39 percent of users.

In order to be able to exploit the potential of smart speakers, the basic needs of the listeners must be addressed: They simply want to skip contentFind exciting content by topic or receive recommendations for programs tailored to your needs - on demand. Life is too short for content that doesn't really interest us. Radio providers / broadcasters who understand this will continue to bring their audio to the people for the next decade.