How do I fix a broken snare

Some time ago I had already watched a video in which a drum maker used the wood of an old white barrel to manufacture a kettle in barrel construction. Recycling always sounds great and after a little research it was clear that I would also build the drum as a stave snare. The dimensions of the individual segments were determined and the search for suitable raw material was already on. As luck would have it, my father-in-law had old oak parquet in the attic. A carpenter friend of mine even sawed the boards to fit for me 😄 I got the hardware in the form of an old Amati snare from a fire brigade band where I have been playing temporary jobs for years. I even had an old withdrawal myself. A device had to be built to round off the bowl and for that I first needed a "workbench". Here is the list of all the material:

- various MDF and OSB rests from the hardware store (approx. 15 €) 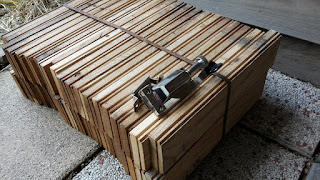 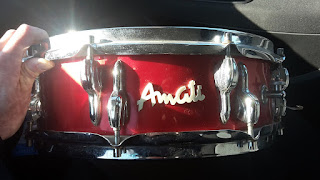 In the absence of a workshop, the staircase of my apartment was confiscated without further ado. An old saw table from my father combined with an MDF board that could be used on both sides served as a workbench. One side was used for surface grinding, the other to attach the milling device (Fuchs just had to be xD). A frame was built from two OSB panels, on which the boiler will later be rotated using the milling machine. 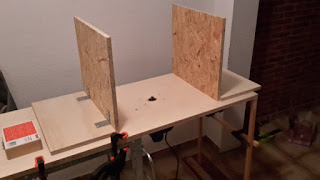 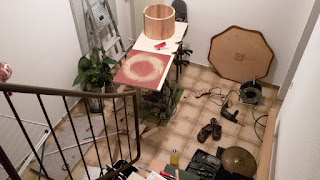 The already prepared segments were arranged according to the color and grain, connected to one another with adhesive tape and then glued under tension (with a tension belt). After the glue had dried, the raw kettle was shortened uniformly on both sides with a temporary device. 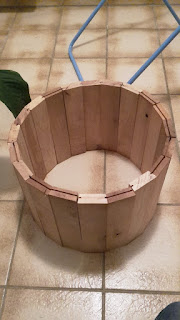 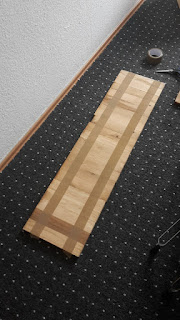 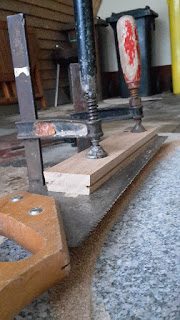 It turned out that the exact clamping should be the hardest part of the construction. Unfortunately, it didn't work right away and so the shell thickness was very irregular. As is well known, special sounds require special instruments and so I didn't let the "mistake" slow me down. 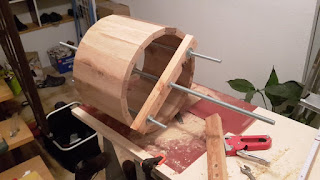 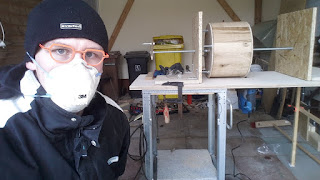 After the boiler was round, it was time to extract the hardware. The Amati snare was in poor condition due to incorrect storage. Many parts were rusted or crumbling. Fortunately, the lugs and the hoops were not directly affected. Thorough polishing enabled me to remove all defects. The screws for fastening were exchanged and so I got really original and massive looking hardware. 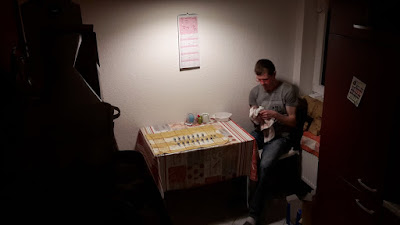 Now only the holes for the hardware had to be drilled (Yes !! For the first time use my own tools), and the boiler painted. For this I made my own template and a kind of holder for the workbench. A straightforward box, only next time I'll be using a bigger drill. By the way, I opted for a matt clear coat. In my opinion the best way to let the raw charm of the wood work. Oil or wax would also have been possible.

Important:Do not cut the burr of the kettle until after painting. This guarantees later that no bubbles, inclusions or the like make the optimal mood of the skin difficult.

I opted for 45 ° with a slight "counter-cut" which is supposed to produce a more open sound. 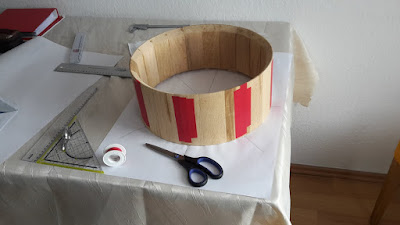 Finally, the snare bed was filed and this is exactly where I made the biggest mistake and thus had a very negative effect on the snare. I cut an extremely deep bed (I think almost 3 mm) but the standard is a maximum of 1.2 mm. After I had attached all the parts and wanted to stretch the heads, I noticed that the reso was really making waves. Very ugly and the carpet now rustles very strongly. A mistake because I might fix it someday. Nevertheless the project was finished and I am proud as hell :) 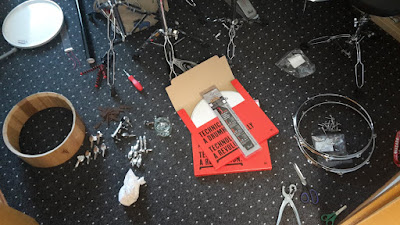 Drum making is GREAT !! Everyone who loves their instrument should have a self-made drum at home. You learn an incredible amount in a short time and it is not that difficult if you are a little creative. My stave snare made of oak now has, reasonably muted, a rich but overtone-rich sound, looks great and everything together did not cost 100 €. The next drums are sure to come!

If you have any questions about the details (angles, dimensions, etc.), just get in touch. I am happy to provide information.