The RV site has been available since the "Welcome amiibo" update. The access consists of a wide staircase, which lies in the cliff that borders the city to the east or west (depending on the city map). If the camper place is added to an existing city by the update, the location of the access is already determined and, unlike the fencing of moving neighbors, cannot be changed even by resetting.

Harvey's cabin and parking spaces for two mobile homes are located on the motorhome site. In addition, there are unchangeable city beautifications such as a water pump and a fireplace, which is lit in the evening from 7 p.m. You press

while you are standing by the fireplace, your character will dance a short campfire dance. In winter, on the other hand, the fireplace burns all day and he can warm his hands there during the day. Tree trunks and tree stumps provide seating, but the hammock can also be used.

Harvey the dog is the manager of the RV site. He is the contact person for all questions relating to the motorhome space. 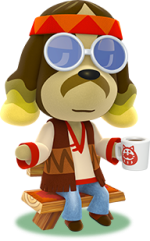 In front of his hut, you can buy two items of furniture a day for five camping coupons each. These items were added with the "Welcome amiibo" update and are partly known from Happy Home Designer. They cannot be ordered from the catalog at Nepp und Schlepp. 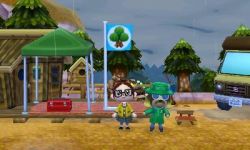 Most of the time, Harvey sits in his little chair. For a change, he sometimes has a drink or reads a book. You can rarely find him standing up when he is dancing with marakas or a tambourine or feeding the birds during the day. If he feeds birds and you chase them away, Harvey gets frightened. Meanwhile, you can sit yourself in the chair. When it rains, he wears rainwear just like Moritz. 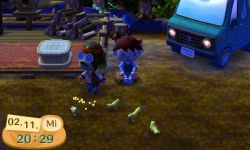 When Harvey feeds birds and you say "Namaste, no!" To him several times, he sometimes gives you a bean basket.

There are several ways to get RV campers.

Every day a random visitor camps in the rear motorhome parking lot. These are either special visitors or city dwellers. The prerequisite is that this visitor is currently not in your city or that their holiday does not take place this month. 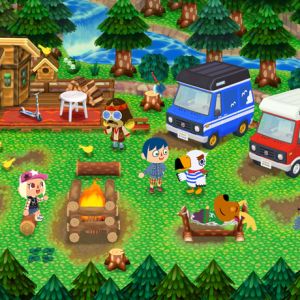 These visitors may happen to be camping with you:

With Buhu's help, you can also invite city dwellers to the motorhome site who are actually in your city and of whom an amiibo figure is available. In this case, Buhu takes her place but cannot take over her duties because he is not familiar with her activities. The player must have spoken to the city dweller before, otherwise the motorhome will remain locked.

These city dwellers can camp with you in the front motorhome parking lot: 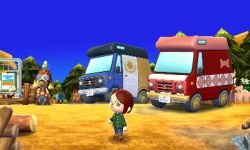 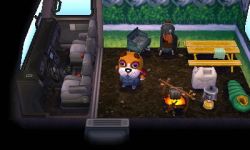 With Buhu's help, you can also invite neighbors to the RV site who would otherwise not appear in your city. They camp in the front RV parking lot and can be persuaded to move to your town.

This includes all neighbors that are available as amiibo cards with motorhomes:

You can also invite neighbors with amiibo figures from other game series.

There is also the option of receiving campers as DLC. Talk to Harvey about this and ask about wireless campers. They then camp in the rear RV parking lot and cannot be persuaded to move to your town.

So far, these neighbors can only be invited in this way in Japan:

The character who camps in your city is always in the motorhome. Nepp and Schlepp are an exception. While Nepp is in the mobile home, Schlepp sits on a log bench by the fireplace.

In the back of the motorhome you can see the interior of the camper. In the driver's area you can sit on the seats and with

sound the horn. The camper and all players who are outside on the motorhome site are frightened. To find out what music is playing in the motorhome, press

in front of the radio in the driver's area.