Are pagers still there and working?

Crisis communication in the secondary network: the pager 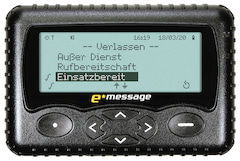 The two-way pager from e * message receives its messages both via its own POCSAG network and via a GSM / GRPS cellular network and can acknowledge them.
Photo: emessage, Berlin Critical infrastructures need a "double floor", which is also called redundancy in jargon.

Whether Germany (almost) switches itself off, as stated in a press release, is a matter of opinion. Some federal states have declared a "state of emergency" in order to concentrate on the essentials, e.g. safeguarding critical infrastructures (KRITIS for short). It is important for these emergency services to have a second infrastructure (a "Plan B"), the pager.

What is a pager?

The two-way pager from e * message receives its messages both via its own POCSAG network and via a GSM / GRPS cellular network and can acknowledge them.
Photo: emessage, Berlin A pager is a small receiver that listens on a certain frequency. There used to be broadcast messages (for many recipients) that were simply displayed, and there were direct-addressed messages that would beep or ring a specific pager.

The Deutsche Bundespost ("Eurosignal") started with the radio call, the DeTeMobil (Telekom Mobilfunk) introduced the city call. Around the end of the mobile phone C network, the "Cityruf" paging service was also given up by Telekom and sold to the company e * message as early as 1999. Here it continues to this day under the term e * Cityruf.

The technology of e * Cityruf is simple and robust. There are "tone only" receivers that just beep when a message arrives. What that means must be agreed beforehand. Today mostly alphanumeric receivers (tariff "Display") are used, which can receive short text messages with 80 characters (letters A-Z, umlauts, digits and some special characters). An example: "Power failed in Hall 8, please call Mr. Müller on 275", could be such a message.

This message is broadcast over the e * Cityruf network. Depending on whether the customer has booked the call zone "nationwide" or "regional", broadcasts are made in the corresponding zones. If the customer wants to change a zone, he can "rebook" himself on the Internet or by telephone. If such changes take place regularly, it makes sense to book a nationwide zone.

e * Message managing director Carsten Hofmann promises a "highly available, redundant infrastructure". His company operates networks in Germany and Europe. In Germany alone there are around 800 transmitters that are supplied with the signals via a satellite connection. The "control center" is in Berlin .

Cityruf uses the older but robust POCSAG protocol. Later systems such as "Flexx" (from Motorola) could not prevail in the long run, the paging provider TelMI went bankrupt in 2001, and the provider "Quix" also gave up in 2000.

e * Cityruf to this day

Many on-call services are still using e * Cityruf today or again. Wherever strict response deadlines have to be adhered to or where there is a risk of malfunctions with consequential damage, e * Cityruf aims to ensure communication - in the city, in the country, in buildings, and often in basements and underground garages. The transmission frequency of e * Cityruf is 440 MHz and thus penetrates buildings better than, for example, cell phones, which usually transmit between 800 and 2600 MHz and soon also at 700 or 3500 MHz.

Does the message arrive?

Until now, radio paging systems have had a fundamental defect. When the signal was sent out, the great shaking and waiting began to see if the message arrives. Was the battery empty or the person carrying the receiver is in a dead spot (which may well exist) - the question was answered at the latest when the person asked for a response. Otherwise the call was made again later.

This problem is solved by the "hybrid service 2wayS" receiver, which combines two communication channels in one device: GPRS (mobile radio) and POCSAG (city call). Messages are sent independently of one another via the e * Message network and public cellular networks (optionally from Telekom, Vodafone or Telefónica). This multichannel alerting ensures even better accessibility.

Hofmann emphasizes: "We cannot rely on just one primary communication technology", because the current development around the spread of the corona virus shows how unpredictable some situations can become. A plan B helps here.

Albrecht Broemme, honorary president of the Technical Relief Organization (THW) and currently responsible for the construction of the adHoc Corona hospital on the exhibition grounds in Berlin, knows and appreciates the e * Message offers from many years of cooperation.

How does the call transmission work? 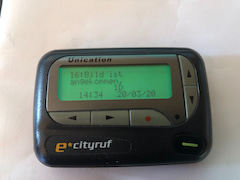 The classic ePrimo pager receiver for e * cityruf. The AA battery lasts about 30 days.
Photo: Henning Gajek / teltarif.de Every Cityruf recipient has a seven-digit phone number. A city call can be made from any telephone. If only a callback is to be ordered and the phone cannot transmit tone dialing (DTMF), dial +49 164 followed by the number. If you can use tone dialing, dial +49 168 and the same number and follow the announcer's instructions and use tone dialing to transmit the numbers that have been agreed beforehand or a callback number.

Be careful when calling from mobile phones, the area codes 0164 and 0168 are sometimes extremely expensive. Original Telekom customers who have not activated a third-party block can send a normal SMS (max. 80 characters) to +49 168 number. Customers in the Vodafone or Telefónica networks generally do not have this option.

Alternatively, a call can be sent on the Internet via the web interface on the ecityruf.de site and a free text with a maximum of 80 characters can be transmitted.

It should be noted that the call transmission can take approximately one to two minutes, depending on the network load.

What does the fun cost?

e * Cityruf is primarily aimed at professional users. But private individuals can also buy a pager and book the appropriate contract. The prices for a classic POCSAG tariff range from 9.88 euros per month (NurTon) to 210 euros per year ("national display", ie numbers and text). In addition, there is the recipient who is bought once (or already exists) or can be rented from e * message as part of the contract. Older receivers from TeLMI or Quix can no longer be used today (without modification). Former Scall receivers may still be operational to a limited extent. Anyone who finds a recipient in their box that is still in good condition can contact e * message and provide the serial number / recipient ID number. Even licensed radio amateurs can do something with these treasures.