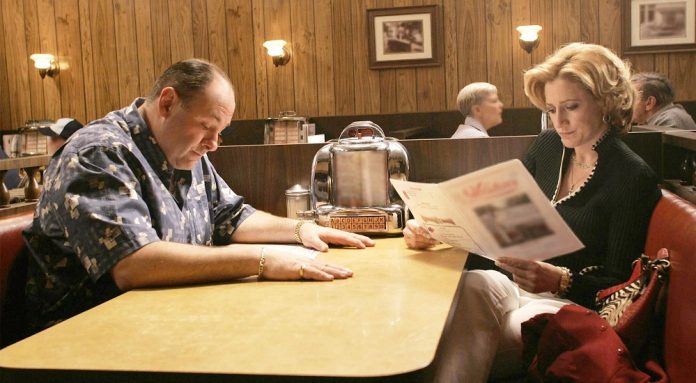 James Gandolfini and Edie Falco in "The Sopranos" © 2007 HBO

"The Sopranos" is one of the greatest milestones of the modern TV era and one of the best works about the Italian-American mafia that has ever been shot, whether in film or on television. The outstandingly played by James Gandolfini Tony Soprano was the pioneer of such morally dubious series protagonists as Vic Mackey ("The Shield"), Don Draper ("Mad Men") and Walter White ("Breaking Bad"). In short: "The Sopranos" is a masterpiece.

As undisputed as the series’s place in television history, its influence and legacy, the series finale was polarizing at the time. We remember: In the very last scene, the soprano family is sitting at a table in the diner, daughter Meadow arrives late, Tony looks up from the table - and then there is a cut to the black screen.

The end of 2007 came so abruptly for viewers that many believed that the broadcaster had transmission problems or that their television set was broken. Rather, it was a risk by the series creator David Chase, who deliberately wanted to leave the end ambiguous. The first reactions to this finale were mixed, but in retrospect it is one of the bravest and best final series episodes ever.

There has been much speculation about the meaning of the last scene, and the most popular theory is that the cut meant Tony's death by a hit man. That would be in line with an earlier scene in the series where they talk about how often in the dangerous life of a mafioso you're dead before you've even heard the shot.

Chase has always vehemently refused to reveal the secret of the final recording or the fate of Tony Soprano. He avoided the relevant questions, insisting that he did not want to leave any door open for a sequel, but that the ending should be very deliberately open to interpretation. If that's how you see it, then you shouldn't read any further from now on, because in an interview for a book about the series and its legacy, Chase apparently blabbered and unintentionally declared the end. Do you want to know?

Alan Sepinwall, one of the co-authors of "The Soprano Sessions", told Chase:

When you said there was an end to the series, you didn't mean Tony at Holsten’s (diner), you just said, "I think I have two more years of stories to tell".

Yeah, I think I had this death scene in mind about two years before it ended ... Tony was supposed to be called to a meeting with Johnny Sack in Manhattan, and he would drive through the Lincoln Tunnel to the meeting and that would be the cut Black happens and you would never have seen him drive back. The theory was that something bad happened to him at the meeting. But we didn't do that.

You realize, of course, that you just referred to this as a death scene.

We will probably never get it clearer than that. But even if Chase has more or less admitted that the ending was intended as the death of Tony Soprano (is anyone really surprised?), Each viewer can still interpret it for themselves exactly as they want. That's the beauty of an open end.

As a reminder below the scene again:

Tony Soprano will be back in theaters next March. The Many Saints of Newark is a prequel to the hit series set in Newark, New Jersey in the late sixties. The son of the late James Gandolfini, Michael Gandolfini, plays the young Tony Soprano. Jon Bernthal ("Marvel’s The Punisher") plays Tony's father Giovanni "Johnny Boy" soprano, Vera Farmiga ("Bates Motel") his young mother Livia. Alessandro Nivola (A Most Violent Year) embodies Dickie Moltisanti, the father of Christopher (Michael Imperiloi) from the series. Leslie Odom Jr. (Murder on the Orient Express), Corey Stoll (Ant-Man), Ray Liotta ("Shades of Blue") and Billy Magnussen (Game night) play other roles. Chase wrote the script and the frequent "Sopranos"-Director Alan Taylor directed the film.