What is complementary gene action

Definition: Polygeny / Polygene inheritance is a term in genetics that describes the participation of many genes in the expression of a trait (phenotype).

- This special form of inheritance cannot be explained with the help of Mendel's rules, because these consider clearly distinguishable characteristics, such as the seed shape of the pea (this is simply / monogenically inherited).

- Polgygenically inherited traits are difficult to study because some / many genes make up the same trait, each gene has a small effect on the phenotype and the effects of the different genes add up.

- In polygeny there is a mixture of the gene effect in the characteristic expression, so that no clear Mendelian inheritance can be traced.

If, conversely, several characteristics of the phenotype are determined by a single gene, one speaks of polyphenia.

There are two types of polygenic inheritance:

- The genes involved each determine a partial characteristic and in the end complement each other in their effect, so they depend on each other (2 each).

- In the case of a missing gene pair, the overall characteristic is therefore not expressed.

- Expression of the comb in chickens

- Different genes work together in the development of a characteristic and add up in their effect.

- In the absence of a reinforced gene, the characteristic is still pronounced, but weaker.

- The genes can be on different chromosomes and are therefore inherited independently of one another (no coupling).

- Color intensity of the skin color 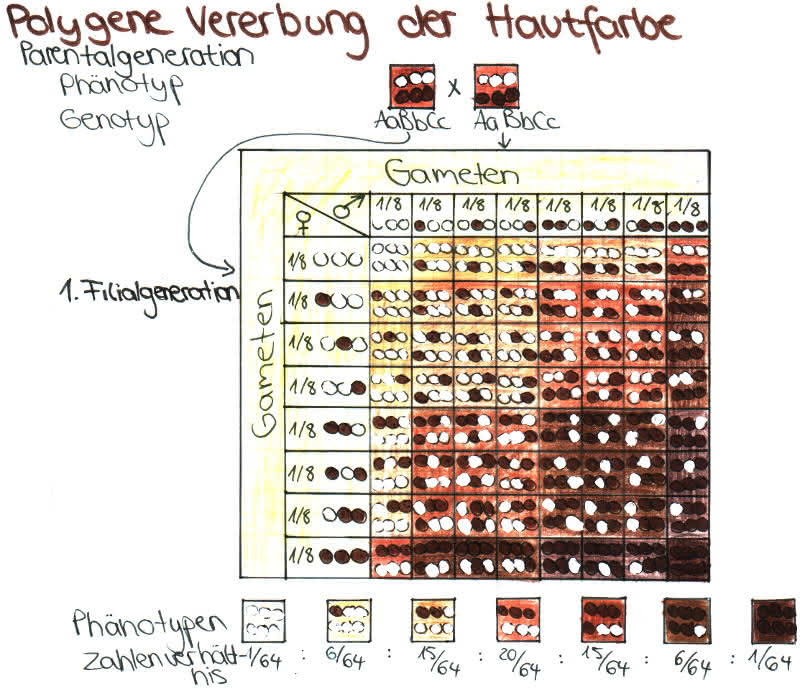