How are the climatic conditions influenced by the topography? 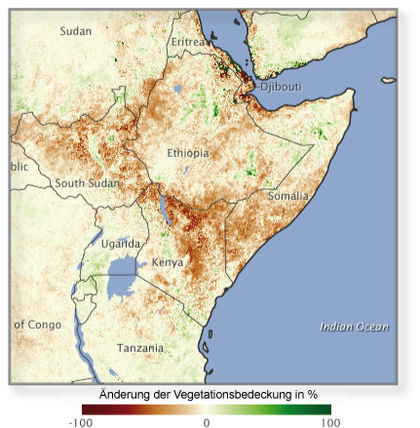 East Africa is roughly between 10 ° N and 10 ° S and from 30 to 50 degrees East. In essence, this includes the larger states Ethiopia, Somalia, Kenya, Uganda and Tanzania. Sometimes Mozambique and Madagascar in the south are also included, as well as the new state of South Sudan in the north. The northern part with Ethiopia, Somalia and South Sudan is also known as the "Greater Horn of Africa". Although East Africa lies on both sides of the equator, it does not have a typically tropical climate. High mountains and highlands mean that large parts of East Africa are sometimes cooler and - in the lee of the mountains - drier than would be expected for the latitude.

The highland and mountain regions, in which tropical diseases such as malaria are less common due to the lower temperatures, are characterized by a high population density and intensive agricultural use. In Ethiopia, Kenya and Tanzania, for example, smallholder agriculture is the determining economic factor. In Ethiopia it represents 50%, in Kenya 30% of the gross national product and is by far the largest employer.[1] It is heavily dependent on sufficient rainfall, which is, however, subject to strong fluctuations, which not infrequently lead to droughts and floods. The most recent devastating droughts of 2005/06 and 2010/11, followed by catastrophic heavy rain, clearly demonstrated the economic dependence of East Africa on adequate rainfall.

Because of the uncertain data situation, temperature changes for the whole of East Africa are very difficult to estimate. In Ethiopia, temperatures rose by 0.3 ° C per decade between 1948 and 2006. An examination of individual data sets from stations in Kenya, Uganda, Rwanda and Burundi has shown a temperature increase of 1.54 degrees between 1966 and 2006, for Kericho in the western highlands of Kenya even by 1.69 degrees.[2]

3 Distribution and origin of precipitation

In the equatorial areas of East Africa there are two main rainy seasons, the so-called short rainy season from October to December and the so-called long rainy season from March to May. In the northern and southern peripheral zones, precipitation in the northern and southern summer becomes more important. In most parts of Ethiopia, the main rainy season is in summer. The highlands of Ethiopia receive over 2000mm of rainfall per year, of which 50-90% falls from June to September.[3] Due to the very changeable topography with mountains and valleys, the climatic conditions are very different in all of East Africa.

On the edges of the highlands and mountain ranges of East Africa, humid air masses are forced to rise, cool and rain down. In contrast, it is very dry in the low coastal areas. But where do the humid air masses come from? There are basically three maritime regions of origin, the Gulf of Guinea in the Atlantic, the western Indian Ocean and the eastern Mediterranean. The fourth source of precipitation is the tropical rainforest of the Congo Basin. How much precipitation comes from the respective area of ​​origin depends on the region in East Africa and the season. In most cases, however, there is a lack of sufficient observation data to determine the path of the humid air masses more precisely.

According to a current study on the origin of the precipitation in the Ethiopian highlands in the northern summer (July-August), the main share (51%) comes from the transport of moist air from the eastern Mediterranean and the Red Sea from the north. A great deal of water evaporates from the two subtropical seas and reaches the highlands of Ethiopia with northerly currents via the Arabian Peninsula and the Red Sea. In second place are currents from the southwest tropical Indian Ocean, from which 32% of the rainfall comes. Part of this transport route runs across the Congo Basin and reaches the Ethiopian highlands from the southwest, which is why it was often incorrectly ascribed to the Gulf of Guinea. However, only 4% of the precipitation in the highlands of Ethiopia comes from here. The rest comes from regional sources and the northern Indian Ocean.[3]

4 Changes in precipitation and their causes

East Africa suffers from frequent extreme events. In recent years there has been a lot of heavy rainfall in East Africa with partly devastating floods, from one such event per year in the 1980s to seven events per year in the years 2000-2006. This affected almost two million people each year.[4] East Africa is no less affected by droughts. In 2010/11 there was a severe drought in the Horn of Africa, which some measurement results classified as the most severe drought in the last 60 years.[5] Over large parts of the region, 50-80% less rain fell than the average.[6] The precipitation does not fall regularly, but is subject to strong fluctuations. Such fluctuations exist from year to year, but also over longer periods of time from decades to centuries. Obviously there was a long-lasting drought in the late Middle Ages. After that it became increasingly wetter with the climax in the 18th century. Then a dry phase followed, which continues into modern times.[5]

In the case of long-term fluctuations, the assignment is even more uncertain. This is also due to the fact that the data situation makes it difficult to recognize such fluctuations at all. In some cases only estimates are available for individual regions of East Africa. Northern East Africa (also known as the "Greater Horn of Africa": southern Sudan, Ethiopia, northern Uganda and Kenya - between the equator and 15 ° N), like the Sahel zone, experienced a significant decrease in summer precipitation in the 1970s and 1980s. Precipitation decreased over large parts of the Ethiopian highlands by more than 30 mm per decade, in western Sudan by more than 60 mm per decade. After the 1980s, the warming of the North Atlantic seems to have caused precipitation in the Sahel to increase again. For northern East Africa, on the other hand, the period of low precipitation seems to persist or even intensify. In the period 1990-2009, for example, there was less precipitation than in the period 1970-1980, which was dry compared to previous decades. Precipitation was particularly low in 2008 and 2009, accompanied by strong droughts in some East African countries.[7]

The decreasing summer precipitation in northern East Africa contradicts model projections that predict higher precipitation for East Africa.[4] Some researchers blame the warming of sea surface temperatures in the Indian Ocean as the cause of the current development. The Indian Ocean has warmed up significantly in the last few decades, especially in its south-western tropical part. As a result, convection and precipitation have increased over the ocean. This was accompanied by a westerly expansion of the Walker circulation, the ascending branch of which has shifted westward over the Indian Ocean, as a result of which the descending branch to the west shifted towards the African coast. The increased precipitation over the Indian Ocean has also released a great deal of latent energy during condensation in the middle troposphere, which has also spread to East Africa as warm and dry mountain air. Here it has strengthened the stability of the atmospheric stratification and suppressed convection. It also weakened the transport of moist air from the Congo Basin. Since model studies attribute the warming of the Indian Ocean primarily to the increasing concentration of greenhouse gases in the atmosphere, it must be assumed that the decreasing summer precipitation in northern East Africa is anthropogenic and will continue in the coming decades.[7]