Which limits our knowledge of physics

Researchers at the Ruhr University Bochum and the University of Duisburg-Essen have gained new knowledge about quantum dots. These are small islands in semiconductors in which individual electrons can be locked. They could one day form the information units in quantum computers. By finely adjusting the semiconductor properties, the physicists created special, long-lived energy states inside the quantum dots, which are normally too unstable to be measured. The results are published in "Physical Review B" on January 15, 2018. The magazine recognized the contribution as a highlight article.

A research team led by Dr. Arne Ludwig from the Bochum Chair for Applied Solid State Physics with Prof. Dr. Björn Sothmann from the University of Duisburg-Essen as part of the Materials Chain Research Association of the University Alliance Ruhr.

Usually a quantum dot is in thermodynamic equilibrium; that is, the electrons contained occupy the available energy states one after the other from lowest to highest. These energy levels can be measured with the help of so-called capacitance-voltage spectroscopy. States in non-equilibrium - in which the electrons do not obey the normal rules for the occupation of the energy levels - could not yet be detected with this method. This is exactly what the team from Duisburg-Essen and Bochum succeeded in doing.

"Non-equilibrium processes are very useful for tailoring materials for certain technical applications," explains Prof. Dr. Andreas Wieck, co-author and head of the Chair for Applied Solid State Physics. “But they can also be fatal. Therefore, knowledge of the generation and control of these processes is important. "

Pairs of electrons and electron holes are created

The key was to keep the unstable non-equilibrium states alive long enough to be able to measure them. For their experiments, the researchers produced quantum dots in a semiconductor with finely adjusted material properties. In the quantum dots they created pairs of electrons and holes, the latter being created by the targeted removal of individual electrons and which in the solid state can be viewed as antiparticles of the electrons. If the electron and the hole meet, they cancel each other out. The energy released is emitted in the form of a photon, i.e. a single light particle. 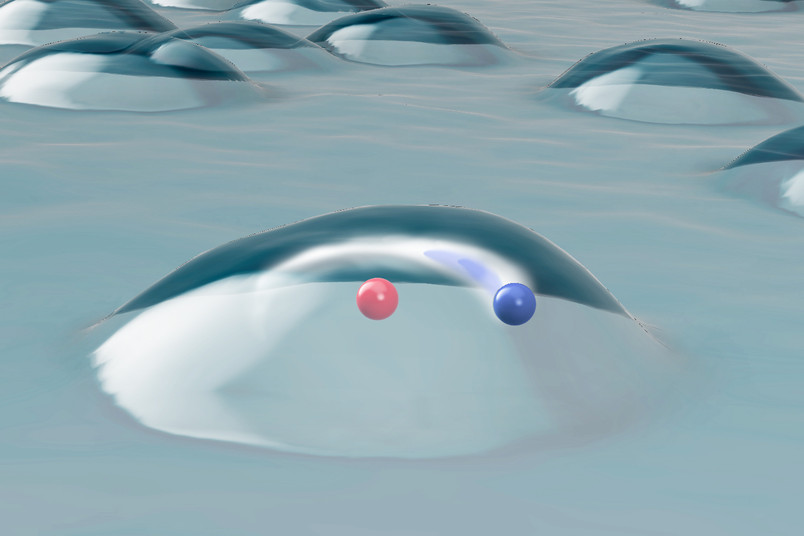 This is how you can imagine quantum dots in a solid.
© Sascha Valentin

The researchers used the opposite phenomenon to produce the electron-hole pairs: They irradiated the quantum dot with light, which created electrons and holes inside.

Measured non-equilibrium states and described in the model

The physicists had tailored the material structure of the quantum dots and their surroundings so that they could now use the electron holes to specifically extinguish individual electrons. This left electrons in a non-equilibrium state, i.e. electrons that occupy atypical energy levels. The team measured these states with capacitance-voltage spectroscopy. In addition to the experiments, the scientists created a model that theoretically describes the measurements of the non-equilibrium states.

“It was obvious to interpret the experimental results as non-equilibrium phenomena,” says Bochum's first author Sascha Valentin. "Developing a physical model, however, meant bigger pull-ups that could only be done with the help of our theoretical colleagues."

"Surprisingly, we also found out that an established model that describes the dynamics of the measurement of equilibrium processes needs to be corrected," adds Arne Ludwig.

The profile focus Materials Chain of the University Alliance Ruhr combines the know-how of more than 200 research groups in the Ruhr area; including internationally renowned experts and highly qualified young scientists. The Ruhr University Bochum, the Technical University Dortmund, the University of Duisburg-Essen and their partners offer a variety of research facilities - from characterization in atomic resolution to component production - that cover all areas of the materials chain.

The selected images are downloaded as a ZIP file.
You will find picture lines and picture credits after unpacking in the included HTML file.
<?