Why is Capri so famous among celebrities

Celebrity wedding on the island of Capri

Every now and then a little gossip is a must. So I heard - or rather I read - the other day: Heidi Klum and her lover Tom Kaulitz want to get married. So far so nice, but somehow nothing special either. Now the supermodel could get married anywhere in the world, in Los Angeles, for example. But no. It will, so the gossip papers write, Italy. More precisely, the dream wedding should take place on Capri in August. The perfect month for this, because August is wonderfully summery here and it is the month with the least rainfall throughout the year. Not just because of that capri a great place to get married: the small island is considered to be the most romantic in the Mediterranean. The writer Paul Heyse even dedicated the novel “Wedding on Capri” to her. There have been love stories on the island since the Roman Emperor Tiberius. 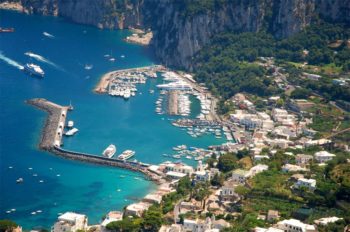 View of the port of Capri

Italy seems to be magically attracting celebrity weddings. Not only from starlets like the fashion blogger Feiping Chang, who said yes to an extremely wealthy banker on Capri two years ago. Just like the stylist Giovanna Battaglia, by the way, who wore three wedding dresses at her wedding and three different outfits during the celebration. Sounds kind of exhausting ... George Clooney got married in Venice, goalkeeper Manuel Neuer in Apulia, Justin Timberlake ended up in Fasano, also in Apulia, Tom Cruise did it in Rome. In this respect, Heidi Klum is in good company, even though she has of course chosen one of the most beautiful areas of the country to suit my personal taste.

However, it is questionable whether she will notice much of it during her celebration on a luxury yacht. In doing so, she misses a lot - from the Blue Grotto to Villa San Michele. Speaking of villas: It is quite possible that Ms. Klum already knows the sights of Capri. After all, she should be well acquainted with a host of other stars, many of whom enjoy vacationing on the island. Or even own a property here, as allegedly Mariah Carey.

What do the local residents think of all the star hype on their beautiful island? They're probably taking it easy. However, the general increase in the number of holidaymakers has been a point of contention on Capri for years. Because of the hype, some people are sure to overlook how beautiful it actually is here. And that you actually came to have some peace and quiet. With guests like Heidi Klum, however, it will be difficult. They just usually stay among themselves anyway. In any case, I am not expecting an invitation to the wedding of the year. It's a shame actually ...

If you would like to spend your vacation on the glamorous island, I can only recommend the travel agent Bella Ischia, which specializes in vacation trips to this region.

Your name, email address and website are optional. You can find more about this in our privacy policy. Please note: Comments do not appear immediately, but are activated within 24 hours.