Who was the first mathcore band 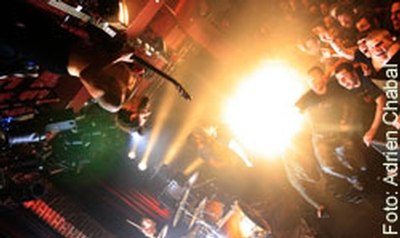 What use are all the great trips to you if you don't have a decent bed?

After DILLINGER ESCAPE PLAN had not renewed their contract with Relapse Records, they founded their own record company Party Smasher Inc. last year. The band from Morris Plains, New Jersey recently released their fourth record in cooperation with the French metal label Season of Mist Studio album "Option Paralysis". Again there is complex-brutal mathcore to be heard, which has nothing to do with conventional song structures and which has been the hallmark of DILLINGER ESCAPE PLAN for 13 years of band history. I spoke to singer Greg Puciato and guitarist Ben Weinman.

In the run-up to the release of your new album “Option Paralysis” you announced several times that the “metal factor” will be significantly higher this time than with your earlier material. To be honest, I haven't heard much about it ...

Ben: You're not the first to feel that way. Many people have already said to us: “Hey, what are you talking about? You sound the same as always. ”The perception of yourself and that of others have always been two different things. When we started writing the songs for the new album, it felt to me that the guitar riffs were actually more metallic than they used to be, and that the sound was significantly different from our previous albums. But apparently most people see it differently.

What can a band like DILLINGER ESCAPE PLAN have? After all, you are considered one of the most influential mathcore bands, as one that has always written complex and extreme music. In your genre, can you still talk about becoming even more "tricky" and "harder" on a new album? And isn't there also the danger that such a development will only become an end in itself?

Ben: It was never in our minds to compulsively try to take our style to extremes. A few years ago, some guy spread a very strange rumor about us: Apparently we would sit in the rehearsal room and use two dice to randomly determine the time signatures that we use in our songs. This is nonsense, of course. Ultimately, we can only capture the music that gushes out of us at a certain point in time as best we can and try to keep it exciting with organic changes. With regard to “Option Paralysis” that means that this time around we wrote and recorded the songs within a month. We hope that this will make the album look rounder and more self-contained. It was different with our earlier recordings, as we always developed our pieces between tours and the time span between the song idea and the studio appointment was sometimes quite long.

One of the most interesting pieces on the record is "Widower," which features Mike Garson, the pianist in David Bowie's band. Where did you pick it up?

Greg: At the Southwave Festival in Australia we played their song "Wish" together with NINE INCH NAILS last year. And Trent Reznor, their singer, had worked with Mike a few times and so he introduced us to each other after the concert. We have had loose contact with him since then.

Ben: “Widower” was the last track we recorded for the record. When we asked Mike if he'd like to play the piano on the song, he didn't even want to hear our demo, but just came into the studio three days later. He only needed two takes for the song and it worked right away. That was just amazing.

Greg: Mike is an incredibly cool guy anyway. He has told us numerous stories from his touring experiences with David Bowie. And he once said to us: “Guys, your music is crazy. I've never heard anything like it. ”We were of course very flattered. However, he is very sensitive to his age. I once called him "our 70-year-old grandpa". Then he yelled at me: "I'm 64 and not 70, you bastard!", Haha.

What does the album title “Option Paralysis” refer to?

Ben: It alludes more or less to the media society in which we all live and which has a massive impact on our everyday lives. A life without MySpace, Facebook or Twitter has become unthinkable for many. The internet in particular offers countless possibilities these days, the extent and consequences of which can hardly be assessed properly. You're downright confused and overwhelmed by the whole shit without even wanting to admit it. This motif is also reflected in many of the lyrics on the album.

Greg: I believe that in the 21st century we have reached a point where we can see thousands of technical innovations within a short period of time. This has not been the case in human history at this high speed and it seems that many people are not getting on with this development. I'm not saying that technology is bad per se. But I also see that we humans let ourselves be controlled more and more by the things that we have created ourselves, although it should actually be the other way around. If we do not want to fall behind the achievements of the Renaissance and the Enlightenment, then we must not let Facebook and MySpace do our thinking for us.

At the same time, like most other bands, you benefit tremendously from these internet portals.

Ben: Yeah yeah But they don't really give you direction. When I first heard NAPALM DEATH in my life, I wanted to know more about other bands that sound like this. With the help of fanzines and at concerts I was able to get to know more and more music of this kind and thus always had a guide. Those who want to find out more about hardcore today will find countless bands listed on the Internet, of which at least 90 percent sucks. How can you find your way around this oversupply ...?

Does such an overstimulation perhaps also take place on a different, more personal level? When you are on tour, you will surely get to know a lot of interesting people who, due to lack of time, you cannot deal with as intensively as they actually deserve. Can't that be pretty frustrating too?

Ben: That is quite possible. But to be honest, on tour I tend to notice what you miss at home and don't really appreciate in everyday life. Often you first have to come to Berlin or London to find out what you actually have in your friends and family and what they mean to you. And what is also often underestimated: your own bed. I mean, what use are all those great trips to you if you don't have a decent bed on the way in which you can fall asleep carefree?

In the USA you have had many complaints for a long time, mostly from people who got injured at your concerts. How much pain and suffering did you have to pull off?

Greg: Too much! And frankly, it's a bit uncomfortable for us to talk about it, as we've been annoyed about these idiots too often. Mostly it's the parents of kids who sprained their hands at one of our concerts. However, we've been sued for all sorts of shit, not just minor injuries at concerts. Fortunately, most of the proceedings have been discontinued. In general, however, I have the feeling that the US is less reluctant to go to court than it is in Europe.

If you click on "Accept all cookies", you give your consent for cookies to be saved on your device. This turns on essential functions and analyzes the use of our site in order to be able to offer you the best possible surfing and shopping experience in the future. Privacy / Cookie NoticeImprint
<?