What you need to know about stage fright

Stage fright can affect anyone. Before a lecture, a lecture on the stage or a Powerpoint presentation: the pulse gallops, hands and voice tremble, the tension swells - until the red thread breaks. This can go as far as the so-called blackout. Stage fright is a normal phenomenon. But if it leads to self-sabotage, it is time to do something about it. We show what happens when stage fright occurs, whether beta blockers really help, and give tips on how to better control your excitement ... 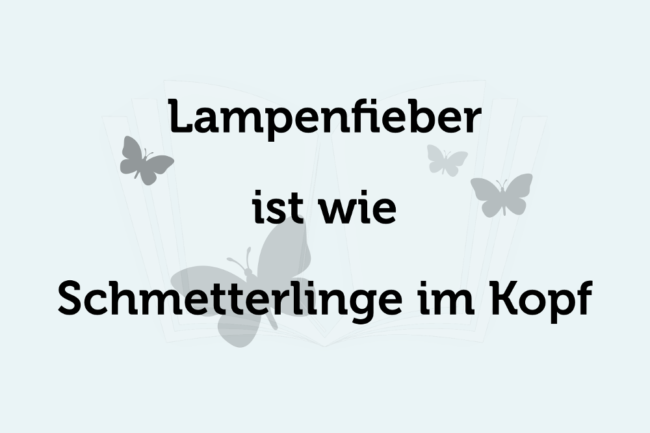 What does stage fright mean?

Stage fright describes a state of inner restlessness, tension and nervousness before a public appearance or an exam. The resulting stress shows - depending on the severity - symptoms of varying degrees. Accordingly, stage fright can be divided into two degrees of severity:

Mild stage fright is manifested, for example, by a tingling sensation in the stomach that reminds one of being in love. Symptoms such as slight nausea, increased urination and bowel movements, clammy hands or shaky knees can also occur. Slight stage fright, however, mostly takes place internally, so that outsiders do not even notice it.

Strong stage fright is also perceived externally. Typical symptoms are blushing, stuttering, erratic movements and profuse sweating, so that spots of sweat under the arms or drops on the forehead can be seen. By observing and recognizing the symptoms in yourself, the effect is usually increased. A spiral of stress develops that can lead to a blackout or long-term social phobia.

Why do you have stage fright?

Stage fright is a completely normal process that results from a psycho-biological program: In life-threatening situations, the body releases more stress hormones. We come into one Fight-or-flight state, which was originally supposed to ensure our survival (see graphic): 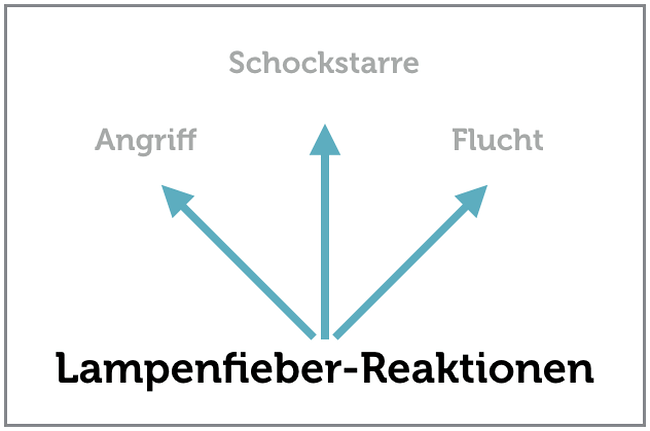 This archaic program is unwound in all situations that we perceive as a potential threat. We never have stage fright when we are alone, but always in the presence of others who judge us and our performance. We want appreciation and recognition for an achievement. This can be an artistic performance, a lecture, a lecture, a presentation or an examination. In this case, those affected are afraid of embarrassing themselves because the performance does not meet the expectations of others.

There are essentially three fears hidden behind stage fright:

Failure to perform as well as possible at a lecture or performance or to fail reveals one's own weaknesses. That scratches the self-image. In addition, when rejected, many question themselves and their worth. The brain derives a threatening situation from these fears and makes us feel even more stressful.

Do you really have a fever with stage fright?

No, stage fright has nothing to do with fever, because the cause is psychological in nature, although some physical reactions are reminiscent of fever.

What happens with stage fright?

Much of the symptoms are the same as the fight-or-flight reflex:

All of these reactions represent a protective mechanism of the body: When danger threatens, the person is able to flee or to defend himself. These options are of course not available to you in a Powerpoint presentation or in the exam. This is why the stress that arises often cannot be channeled and reduced.

Is the nervousness only negative?

Even experienced musicians or actors suffer from stage fright at large concerts or appearances before they come on stage. Many people are mistaken that one needs to quench the excitement. Not correct! Stage fright can also have a positive effect:

This is the result of a study by Mara Mather of the University of Southern California. What is more disturbing are the side effects of stage fright - such as sweating, the trembling of the voice, the shaking knees. Rather, it is more important to get a grip on it and to use the energy that the adrenaline releases.

6 tips on how to overcome stage fright

The more you fear the situation ahead, the more your body will react with stress. In order to be able to overcome unnecessary stage fright, it is helpful to prepare the speech, the performance or the exam psychologically.

Be on site in good time and prepare everything in peace. Nothing causes more stress than arriving stressed and rushed shortly before the start of a speech or a performance and having to step in front of the audience immediately. Just ten minutes of relaxation makes a huge difference in overcoming your stage fright.

2. Familiarize yourself with the environment

Take a look at the location of the event in advance or ask the organizer about it. This tip against stage fright works well for job interviews, for example. Alternatively, you could plan more time and be there earlier. Take your time to look around as long as the room is empty. Also consider a breakdown scenario. That calms you down enormously when you have considered any eventualities. A familiar environment noticeably reduces nervousness.

3. Work with the BRAVO method

Professional speakers regularly use the so-called BRAVO method (also known as the “BRAVO formula” according to Ariane Willikonsky) when they overcome their stage fright. "BRAVO" is an acronym and stands for:

Again, this is a tried and tested trick to overcome stage fright: Pick the friendliest faces in the audience and ignore the unfriendly ones. Keep eye contact with the smiles and nods of your head and you will get more confident every time. Ideally, position well-known, well-meaning listeners in places where you can see them easily.

5. Chat instead of presenting

Conversations don't usually arouse stage fright among friends and colleagues. Because it's not a presentation, but a conversation. And that's exactly the trick: chat more to your audience! Tell more stories and make less big speeches. Storytelling That is also called in technical jargon. First, because your listeners like it better anyway, and second, because you will have more fun and less stage fright.

6. Practice over and over

In addition to poor preparation, a lack of exercise can be a cause of stage fright. Those who have never given a lecture or presented a piece of music have a harder time assessing how others will react. Possible breakdowns are also not so easily considered. The more you practice, you automatically become more confident. For extensive presentations or presentations, you should also work with checklists so as not to forget anything. Overcoming stage fright isn't rocket science, after all.

The idea is: you just take a pill and you no longer have stage fright. Boundless self-confidence whenever you need it. It is estimated that around 25 percent of all professional musicians take beta blockers to control their stage fright when performing. Beta blockers such as propranolol or metoprolol are known. Lawyers and doctors, poker players and managers also like to make do with beta blockers.

This is problematic for several reasons. Medicines induce people to be seen as machines that have to work at the push of a button. On the other hand, there is no experience or the realization that you can do it without artificial help. Instead of overcoming stage fright, it is only suppressed. This weakens self-confidence and runs the risk of becoming addicted. Beta blockers are well tolerated and at least not physically addictive. But psychological dependence remains a danger.

How do beta blockers work?

Originally, it is a drug for high blood pressure - it fights the rapid heartbeat by slowing down the heart muscle and reducing the output of adrenaline. The physical effects of stage fright, such as shaky voices, sweaty hands, and utter confusion in the head, are reduced.

5 home remedies for the excitement

Instead of resorting to medication, you can also fight your stage fright with simple home remedies. The following tips and tricks will at least reduce the side effects:

The excitement will make you produce less saliva. In addition, many people breathe through their mouths when they are nervous or agitated. This creates an uncomfortable feeling of dryness. To counter this, it helps - very simply: drink water. Start by moistening your mouth beforehand and take sips again and again during the presentation. Still water is best. From carbonated drinks you need to burp, and sugary drinks only make your mouth stickier. Chewing gum or sucking candy stimulates saliva production. But that doesn't look good in the lecture.

Give your hands something to do. Use index cards as notes and reminders. Your trembling can be clearly seen on large A4 note papers - not on small cardboard cards. It helps many people to let a so-called "hand flatterer" slip through their fingers before the lecture. Touching this small round stone has a relaxing effect. Use gestures during the presentation to underline your words. These, too, keep the hands busy.

Focus on your breathing. Breathe slowly and calmly through your nose. The nasal hairs filter, warm and humidify the air, making it easier to digest. In particular, the so-called star breathing technique helps enormously in reducing stress (see graphic): 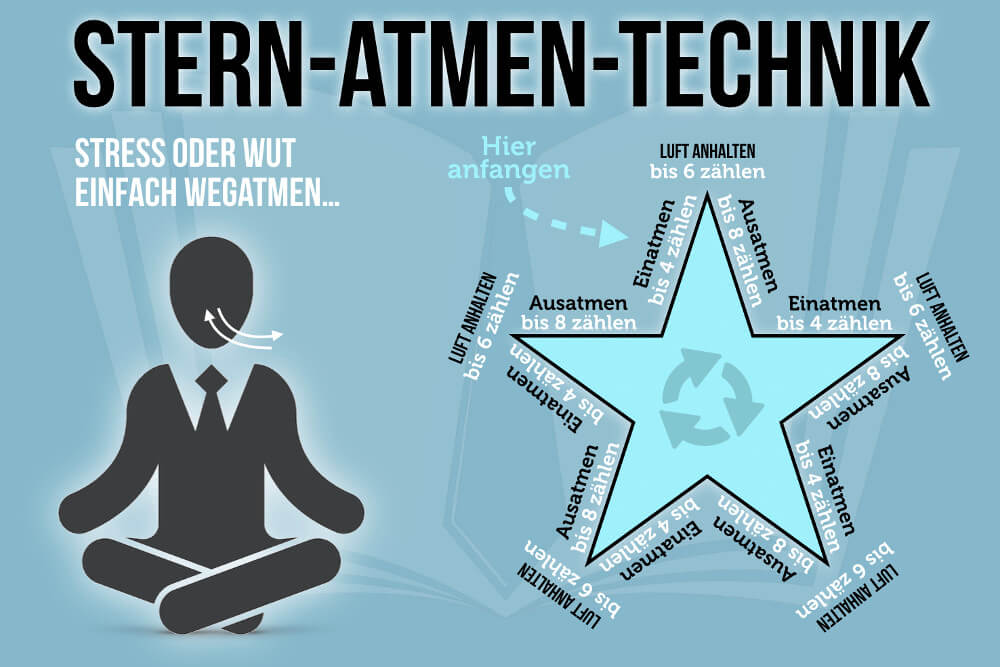 The choice of clothing is crucial here: Do not use synthetic materials such as polyester. These are not breathable and you will sweat more in them. Instead, use cotton or linen. Choose light colors that are harder to see sweat on. In addition, cotton pads are available in pharmacies or drugstores, which you can attach to the inside of the garment at armpit height and which give you additional security.

If you notice that your voice is getting hoarse with excitement, drink a cup of tea with honey before the lecture or gargle briefly with lukewarm water. This makes the vocal cords smoother.

Other readers will find these articles interesting