Why are there bass keys?

Guitar and music theory, U. Meyer

Many instruments can produce very low notes; there is a bass clef to make it easy to write them down. This determines where the small f is located, namely on the line between the two points. This is the f that should be noted in the treble clef on the 3rd auxiliary line under the staff.

The four strings C G d a of the violoncello can all be noted in the bass clef. The double bass with the strings, E, A D G (five strings still have the subcontra-B ,, H) is also notated in the bass clef, although like the guitar it should actually have an "8" under the clef.

Here you will find exercises for reading a sheet of paper in the bass clef, here a section on playing the bass clef on the guitar.

Even with this clef you can represent even lower tones by an octave sign under the clef. And of course auxiliary lines are also used here.

Key to the piano

In the sheet music you can see all the notes that can be played on a piano. Above or below the notes are the "letter designations" ,, A - c '' '' 'and the octave designations such as "dashed octave". 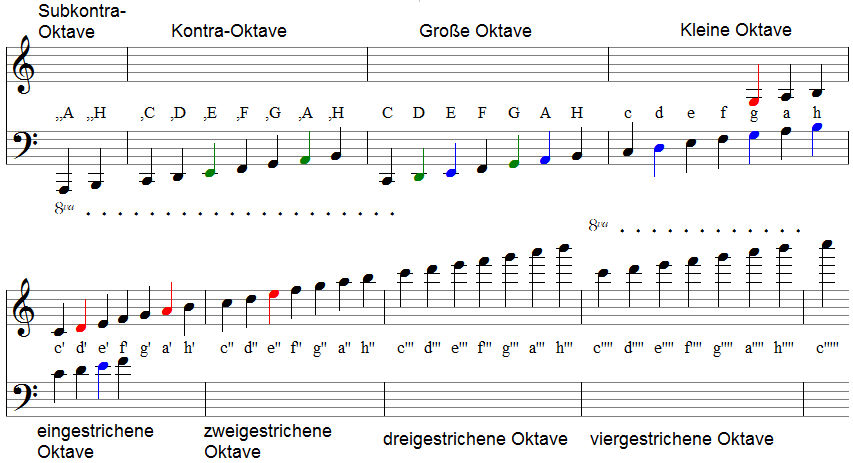 Yes, there are grand pianos with “A-flat” and “G”, two lower notes in the subcontractive octave. I don't know if they are used in piano literature, but the outermost string of a baroque lute, for example, often sounds less concise. If there is another string next to it, the penultimate string is upgraded.

The alto clef or viola clef

It is used for instruments that are not really high, but also not really deep. The people who thought about this system with the different keys were really very motivated to come up with suitable keys for different pitches in order to need as few guidelines as possible.

The strings of the viola or viola are called c g d 'a' and fit perfectly into the alto clef. They would fit almost as well in the octave treble clef used on the guitar, but the C clef has a long history.
Here is something about playing from the alto clef on the guitar.

Of course, there are points of contact and overlap between the three keys. Below you can see the notes c ', b and a three times in violin, bass and alto clef. It becomes clear: in the treble clef these are three relatively low tones, in the bass clef they are notated high, and in the alto clef they are exactly in the middle.
Correspondingly, a high instrument such as the violin is notated in the clef of the same name, cello music is mostly in the bass clef, and music for the viola is best written down in the alto clef - then you need very few guidelines!

All keys can also be on other lines. Common (in French baroque music) is the treble clef on the lowest line, the bass clef on the middle line, and the C clef is used on all possible lines. Fortunately, over time, the more you deal with different keys, the more you get practice.
On this page there are tasks to acquire routine in handling the three most common keys. The next page continues with the topic "How do you play the guitar from bass and alto clef?".