Why are the views inverted through telescopes 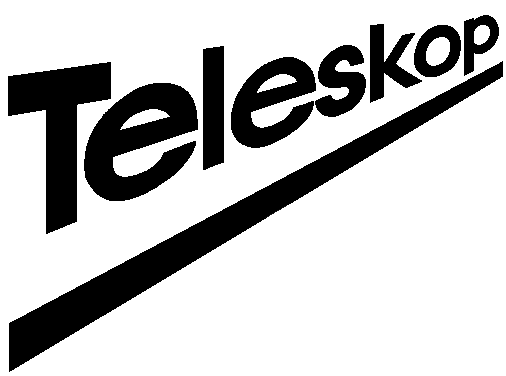 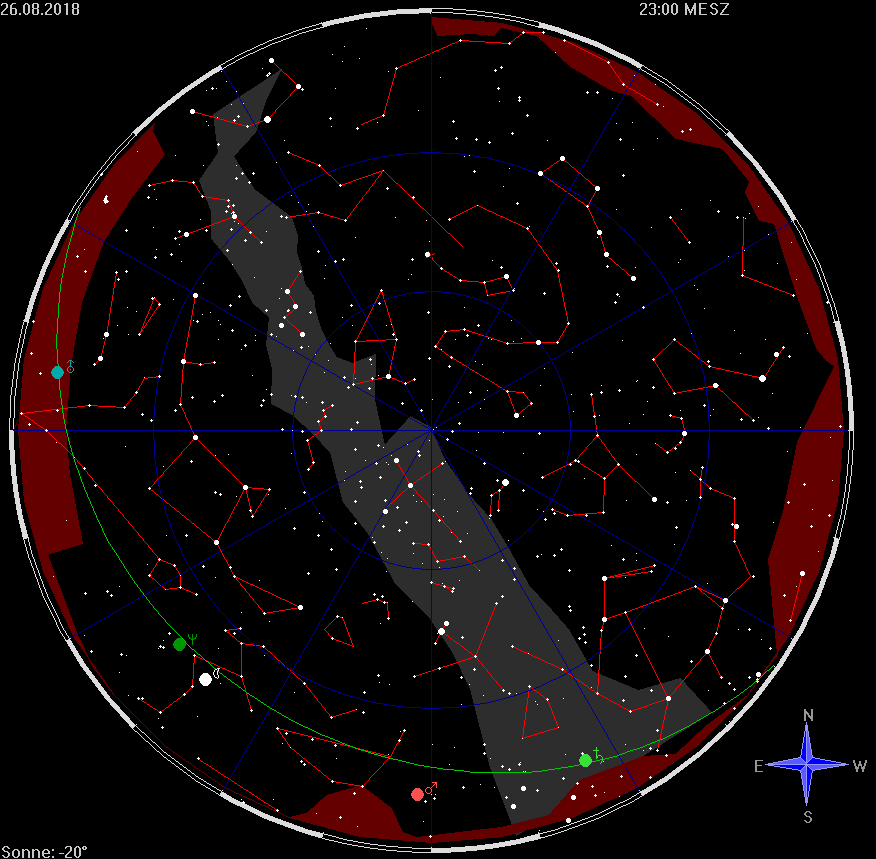 Detailed status of updates under version info
If you have any problems or questions, please email Jürgen Goldan.

The current Windows version comes with Microsoft VS2017 and is derived from an earlier version on ATARI 1040ST. Functionalities have largely been retained. The documentation from 1995 is here.

The program is operated on a console, without graphics and mouse. I do not find a common Windows application with a mouse very practical at night in cold weather. The control of the program can be controlled with a few buttons (especially the Space), but also with a GamePad.

The program shows how:

The screen is divided into different areas:

Remarks
I assume no liability for damage to telescopes, mounts and accessories that result from incorrectly driving the mount. When positioning the telescope, always ensure that there is a free swivel range. The telescope can be driven against the column or mount due to incorrect controls (incorrect position).
Go to content

The program is installed via a setup. The first step is the query of the installation directory. Here shouldn't be a usual directory under C: \ Programs can be used, since these directories are always write-protected from Windows 7 onwards and there are no write permissions. It should be a directory on a secondary partition like D: be used. You are then asked for the options: 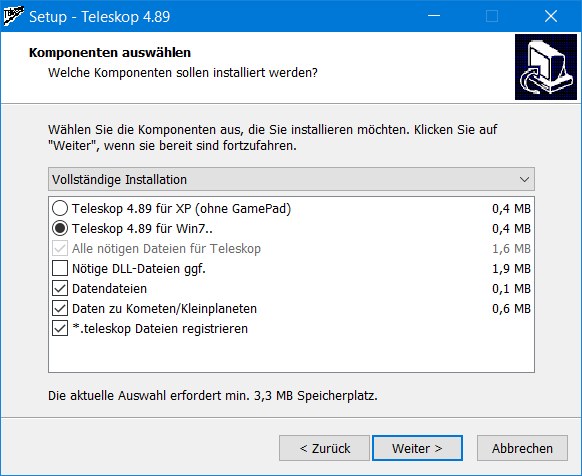 All additional data files and objects should be installed for the first time. Entries in the start menu are created. After the installation, the following files and directories are created:

The program starts in a console. The console should have at least 80x25 characters. The size can also be changed at runtime. The outputs look misaligned for a short time, but are automatically updated again.
Select 'Lucida Console' or 'Consolas' as the character set, no raster character set (Greek characters are then missing), the font size as desired. Everything under properties the console.

If Windows have problems starting, the current runtime for Microsoft VC2017 may have to be installed.
Go to content

The coordinates, data for the mount and the settings used are saved in the settings file. This file can also be written by the program, whereby changes are adopted.
This file is self-explanatory with comment lines (# ..).

Functions from a menu are shown below.

The program is controlled using the functions in the main menu. To activate this (title becomes inverse) the buttons Space or return to press. The selection bar can now be accessed using the arrow keys up down be moved. Through the buttons Left Right the bar jumps to the first / last menu item. The main menu has three views to which the function can be used. A function can be triggered by pressing a single key using the characters on the yellow background.

If a parking position has not yet been set, the current actual coordinate of the telescope must be set manually. This is done using the function. The object menu is then activated. An object itself, hour angle + declination or coordinates with right ascension + declination can be set. For the most precise initialization, the program contains 60 bright stars, which are distributed evenly over the entire sky. In the star catalog used (file Star.cat) the own movements are also stored with high precision.
The initialization of the telescope can always be repeated over the course of an observation night.

In the following, all objects in the sky can be approached using the function. The object menu is activated again and an object can be selected.
Go to content

The normal operation of the program is in the. The telescope can be moved with the arrow keys.
Only a few buttons are required for further control of the program:

All these functions can also be controlled with a GamePad using its buttons and joysticks. 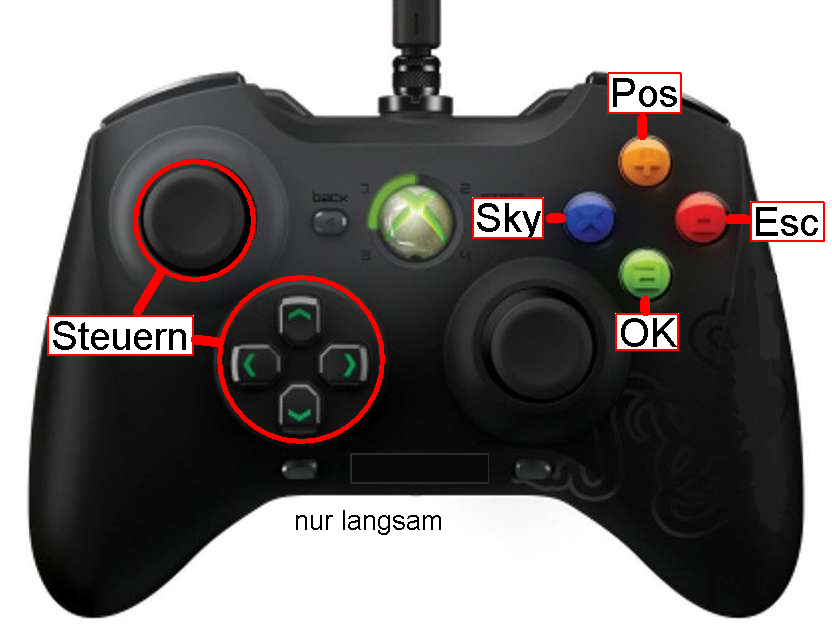 The OK, Esc, POS .. and SKY functions are directly possible using the colored buttons.
3 speed levels are possible for driving the telescope (standard LX200). The analog stick (left) can be used to drive directly through all three levels by deflection. The D-pad next to it limits travel to level 1 for more precise approach to an object. With the right analog stick, the speed is limited to level 2 for slow driving.
Scrolling through the menus is also possible with all sticks. The active bar moves over up / down and with left / right to the beginning or end of the menu.
The wireless version of the GamePad via BlueTooth is a step up. This means that there is no longer any tangled cables on the telescope.
Go to content

The central core of the program is a command line through which all functions are controlled. The command line can be entered directly and the program can be completely controlled with it. Since this is too cumbersome, there is of course a "graphic" menu for the most important functions.

The main menu is activated by pressing the space bar (visible in the title of the menu). Since the main menu contains more titles than shown, a total of 3 menus are set up. These can be switched through in the menu or with buttons 1-3.
After activating the positioning or initializing functions, the right object menu was used to select an object or enter coordinates.
The command line is then evaluated internally by the interpreter and the functions are executed. All commands that are unknown to the interpreter are executed as an external program. This means that the program is open to additional functions.
The program structure is shown in this illustration (still created on Atari): 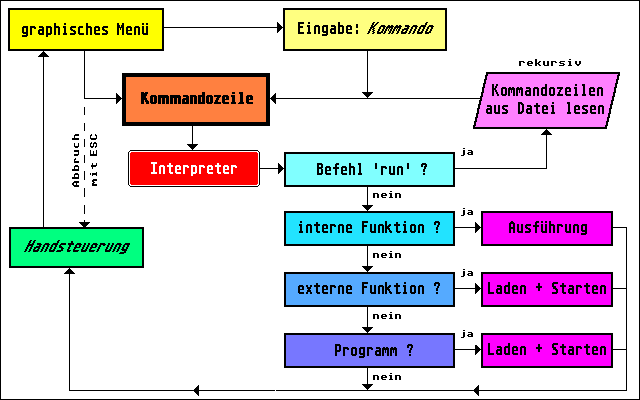 Here is a list of all commands and here is a short documentation with the most important functions of the program.

Here are the important functions of the program in sub-items:

The above command lines can also be transferred to the interpreter from a file (* .job). This allows automatic processes, also time-controlled, to be carried out. This can also be observation sequences, also with photographic triggering (CLICK command).
Saved jobs can be selected and executed using the command or the R key.
Examples here as Endless_03sec.job, Click_Series_6x20.job, Test.job.

With the function in the menu or the S key, an external program to display the current starry sky with constellations, Milky Way, initialization stars, Messier objects and planets (all selectable) is started. All objects can be selected for the control to approach.
There are also shadows here. The program can also be started independently.
The information about the control of the program (times can be changed) are shown to the right of the sky display.
This picture shows the shadowing at the Volkssternwarte Hannover:

The display can be controlled using buttons:

This help is also visible in the Sky window to the right of the compass rose. All settings are retained for the next call.

In super mode, with the initialization of stars (max. 20), the calculation of the installation errors is used through an adjustment. Activation in the menu with or by the SUPER command.
A log file after starting up and initializing 10 stars is here.
The output initially contains the determined values ​​for the installation errors with the accuracies (s0 = total accuracy) and a table with the stars used: serial number, object, location 1/2, July date, hour angle [h], dec. [ °], Error Stw ['], Error Decl. ['], Accuracy of the asterisk ['] and the object name.
The installation errors determined by the program are shown here: 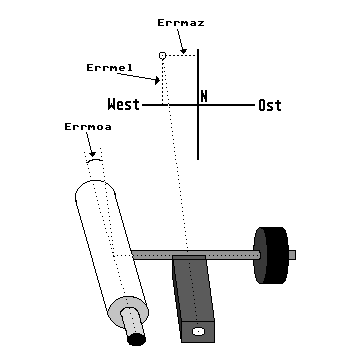 These errors determined in super mode can be entered in the telescope file used. The units are in minutes of arc.
Here is an excerpt from the log with the result of a SUPER trip with 10 stars for the installation on my balcony.

Parking the telescope is an important function. This position is set in the setup, whereby the program also starts with this position. The command for this is on the first menu level. Since positions can also be used as azimuth with height, I use the chimney of the Leinhausen power plant in Hanover as the parking position. 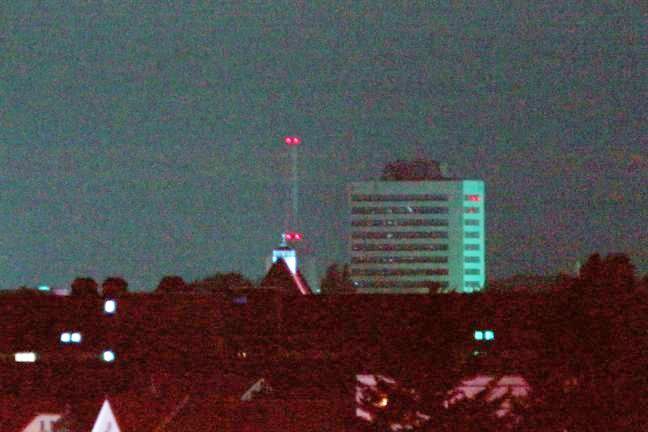 This goal is good to set during the day as well as at night. With this I can also observe astronomical objects (Mercury, Venus, bright stars) during the day!
When approaching the park position, please note that the mount may not stop (there is no command for this under LX200) and must be switched off manually. This works with the FS3.

The screen can be dimmed for night operation (in the menu or key D), a screen with the program information is shown here
with my settings: 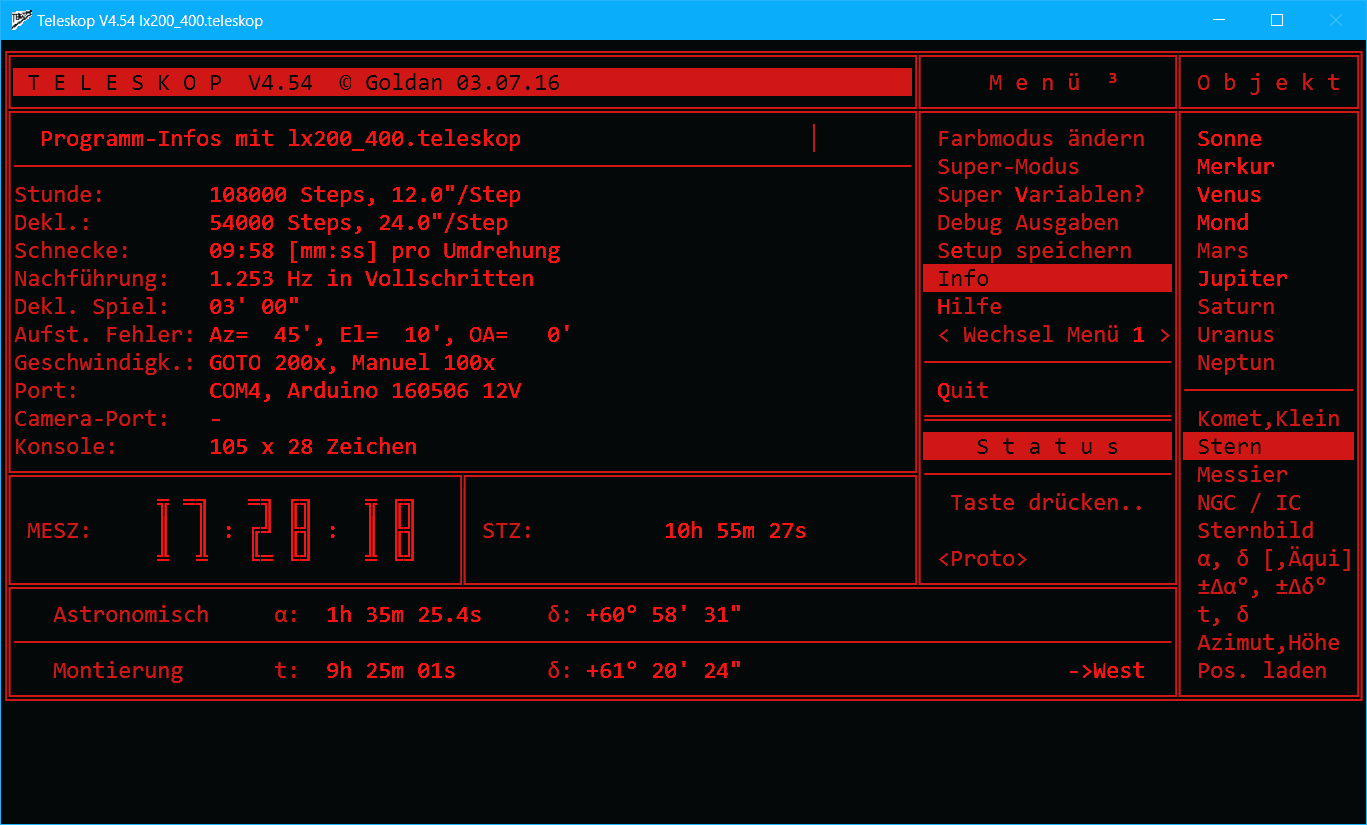 The colors of the program can also be inverted using the function in the menu or the COLOR command.

With the additional program Click.exe as a console (command CLICK, in the menu), a DSR camera can be triggered via a COM port.
Arguments are the duration in seconds plus optionally the number of the COM port. Without the port specification, the next free port is used.
Call: click Sec Port. Without arguments, 0.5 seconds is triggered. On the COM port, RTS and DSR are set to high for the duration.
Go to content

A large part of the objects can be selected via the menu. All objects are also interpreted in one command. The objects are used for the POS .. and INIT .. commands.
The following objects are possible:

Keys can still follow for an object. This sets e.g. the constellation, the distance and other things. These keys are an argument followed by a control character.A ':' is followed by a comment, which is displayed in the object window. Here are the possible elements:

Example of an object from the file Special date:


By POS! ISS and below RUN Endless_3sec.job the ISS can be observed. This also works in the daytime sky! These commands can also be triggered more easily in the menus.
I captured an observation of the ISS with the Canon as a film. Here you can see the movement and the jumping for tracking after 3 seconds.

For Satellite positions I used code from 'libpredict' from Github. Copyright 2015 Asgeir Bjørgan (LA9SSA), a free software for processing TLE files. For Telescope, the files must be converted to TLE extension instead of a TXT extension. The files can be downloaded from the Internet.
Control of the satellites goes through the object selection and switching through to satellites. In the command line, satellites are preceded by a '!' enables. About the job Endless the telescope can then follow the satellites in a loop.
Go to content

Commands are entered in the main menu with the command at the bottom of the console. Previous commands can be repeated using the up / down arrow keys. Here is an alphabetical list of all possible commands. Upper / lower case does not matter, but here the command is always shown as UPPERCASE:

The motors are controlled via the LX200 protocol. Compatible with:

Current path element files for storage in the Objects directory

If you like the program, I would be very happy about one donation looking forward.
This can easily be found here PayPal respectively.
Go to content

I have a modified NP mount myself, converted with 2 stepper motors Oriental PX245M-02A (400 steps). The picture shows the mount with a refractor 80 / 540mm. The optics are from Lichtenknecker, the tube was self-made. 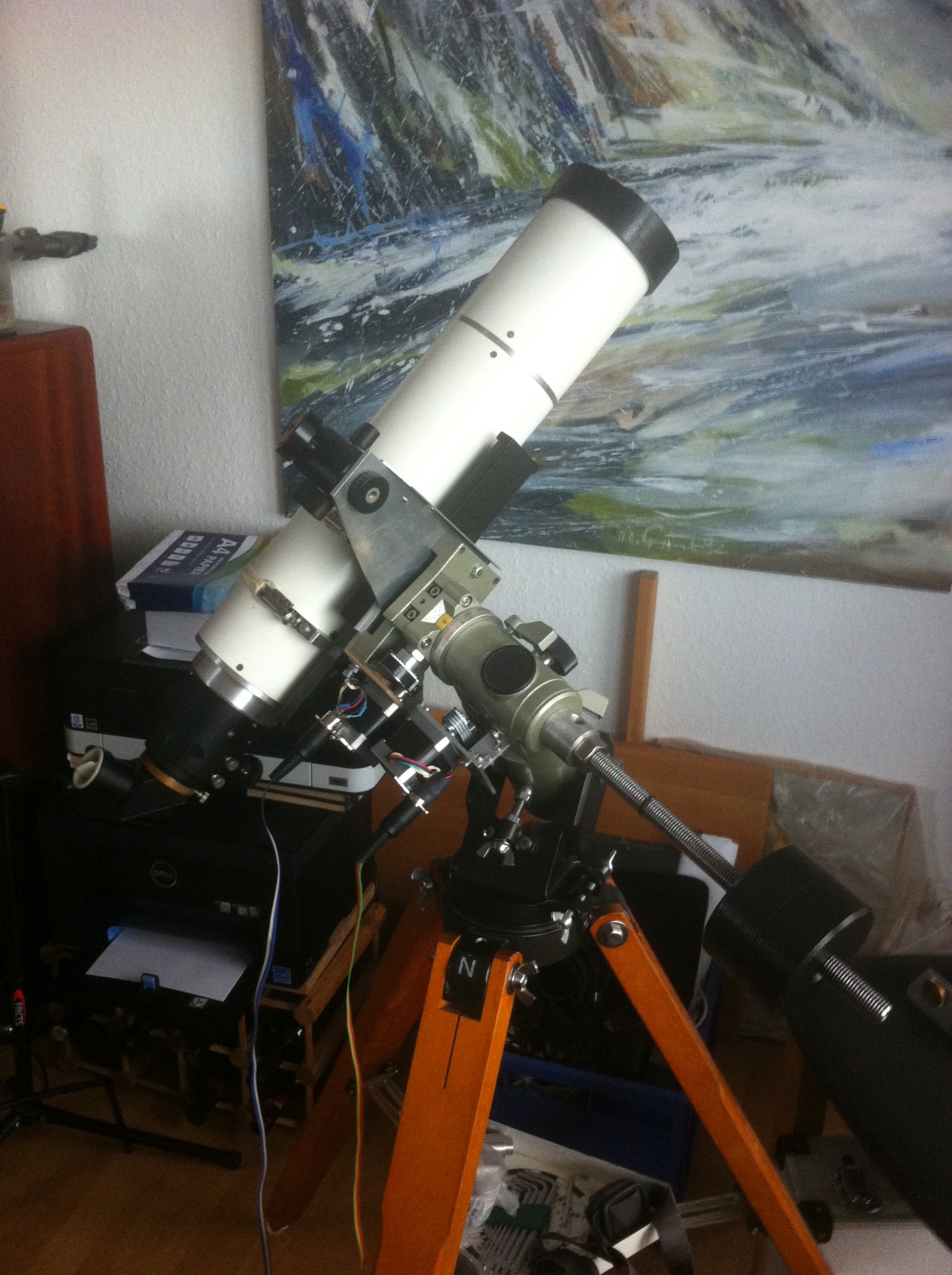 The motors run with a TeenAstro 2.4.1 control with 8 (R.A.) and 16 (Delta) microsteps and can be positioned at a speed of 900x! A full turn of the telescope takes about 1.6 minutes. Control via Windows software. 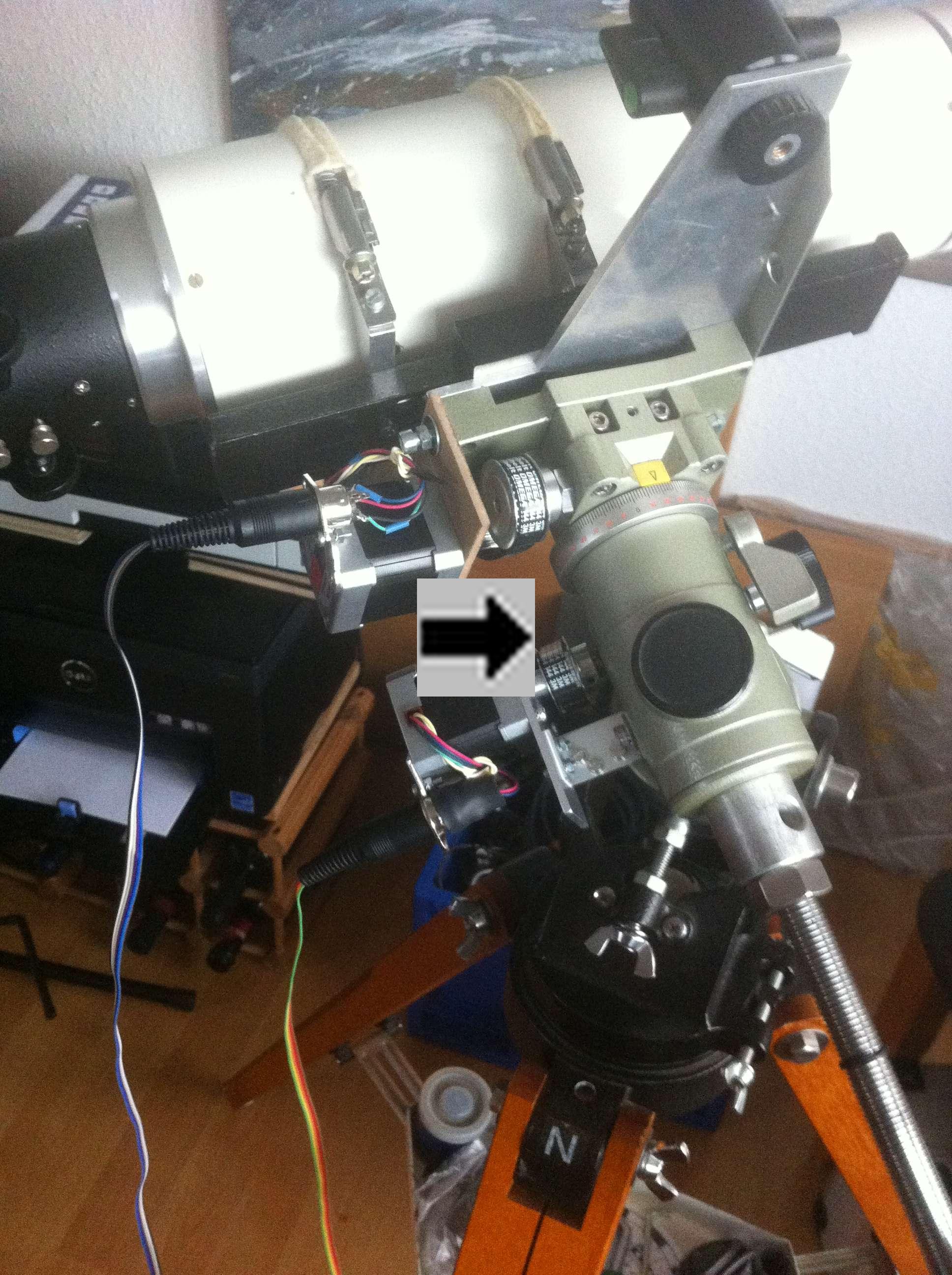 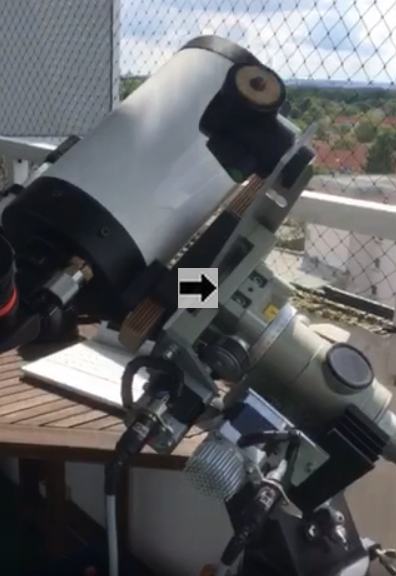