The 10 best beers in Germany

“Drink up, drink up, drink up, so drink up” some people in Swabia say. Not only in the south of the republic are we beer fanatics, in the north, east and west, too, rarely does one skip the famous German after-work beer. Without a doubt, we are a beer nation with a heart for tradition. For more than 500 years in Germany the golden refreshment has only been allowed after Purity Law of 1516 be brewed. Hops, yeast, barley, malt and water - done! No artificial flavorings or anything else out of the chemistry box. So ours isPurity law for beer the oldest food legislation in the world that is still in force today! 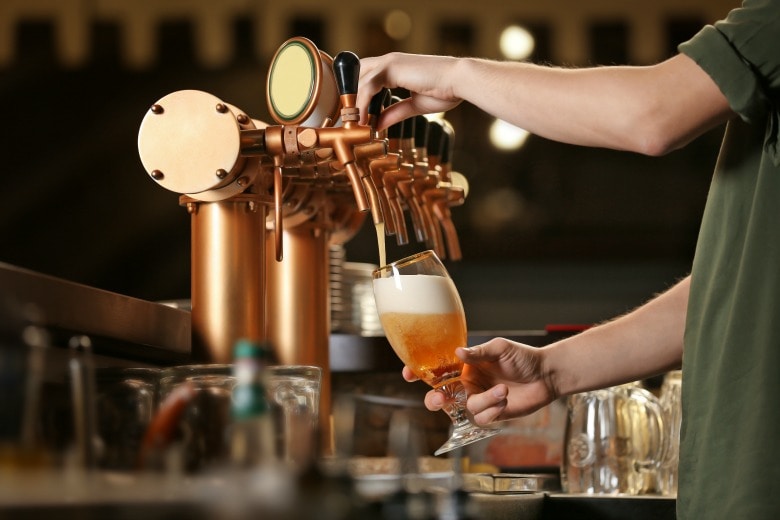 Mirror, mirror on the wall, who taps the best beer in the whole country?

Speaking of the world: what is itbest beer in the world? TheWorld beer championship in the USA. Last year 295 jurors from all over the world selected the best beers in the world in Sage und Schreibe 111 categories. The categories include internationally known ones Types of beer such as pils, pale ale and lager, as well as craft beers and unusual specialties such as coffee beer and much more. The prestigious world championship is the most importantCompetition for brewers around the world and is also known as "the Olympia" of beer competitions.

Probably the most important category is the award for the "German-Style Pilsener", the Pils according to the German brewing method. Because the beer type Pils after the German brewing style is thatmost popular beer in the world. For example, over 2,500 breweries from 66 nations took part in the last World Beer Championship in Philadelphia in 2018 and sent over 8,000 types of beer into the race. The supreme discipline for the beer type Pils, the German-Style Pilsener, was won by the American Rockyard Brewery from Colorado with its Prima Donna Pilsner and is considered to bebest beer in the world, while the silver medal went to Gravely Brewing Co. of Kentucky. The bronze medal went to the British brewery Fourpure Brewing Co. from London. Overall took267 German breweries participated in the beer world championship and won 9 medals. The gold medal was awarded to the Schussenrieder brewery from Bad Schussenried for the “Dortmund / Export or German-Style Oktoberfest” category. This puts Germany in third place behind Canada and the USA, which won 14 and 242 medals, respectively. It should be noted, however, that Canada sent 468 and the US over 5800 breweries into the race. 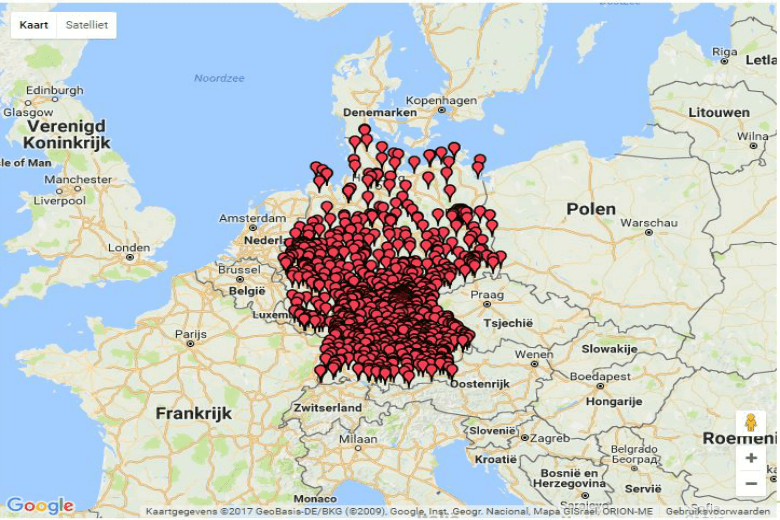 Number and location of the breweries in Germany!

How many different types of beer are there in Germany? - what would you appreciate? Not only did we ask ourselves this question, but also 2 young men from the greater Leipzig area. And so the young men started a project: theGermany beer map. All breweries in Germany are on the map, with every type of beer that is brewed - and new ones are added every day. Currently (as of August 2017) there is a lot going on in Germany7861 types of beer! Onbiermap24.de In addition to the dynamic beer menu, you can also choose theList of types of beer with all 7861 types of beer, sorted by beer brand and place of origin.

7861 Beers in Germany - which type of beer is the most popular? We can answer this question for you. According to a representative survey *, the majority of the population in Germany agrees: themost popular type of beer in Germany is the good old onePilsner. Over 35 percent of those surveyed prefer to drink their beer Pilsener style. Wheat beer comes in second place with just over 10 percent, closely followed by wheat beer in third place. 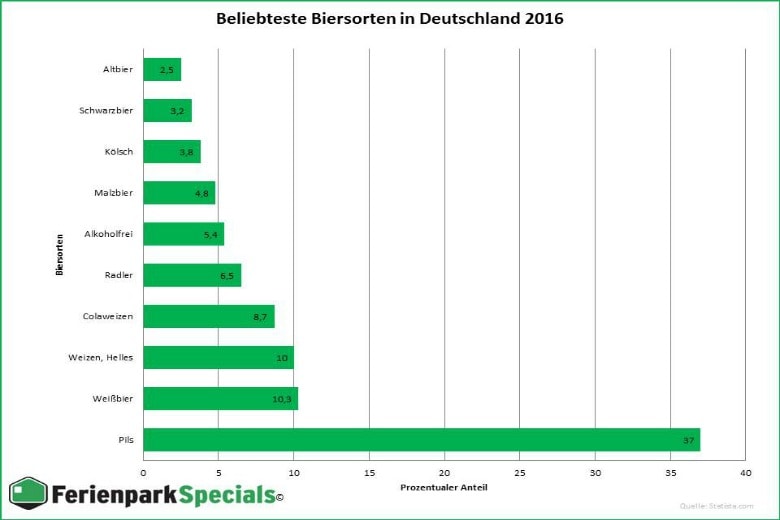 We agree with the statistics, how about you? What is your favorite type of beer?

Germany has a very long and traditional beer culture that is known and valued worldwide. As a German in a non-European country, you are sometimes asked to taste and evaluate the local beer. But at what standard do we compare the taste of other, especially non-European beer brands? Our buying behavior gives us information about this - which of the many beer brands in Germany is our favorite beer? 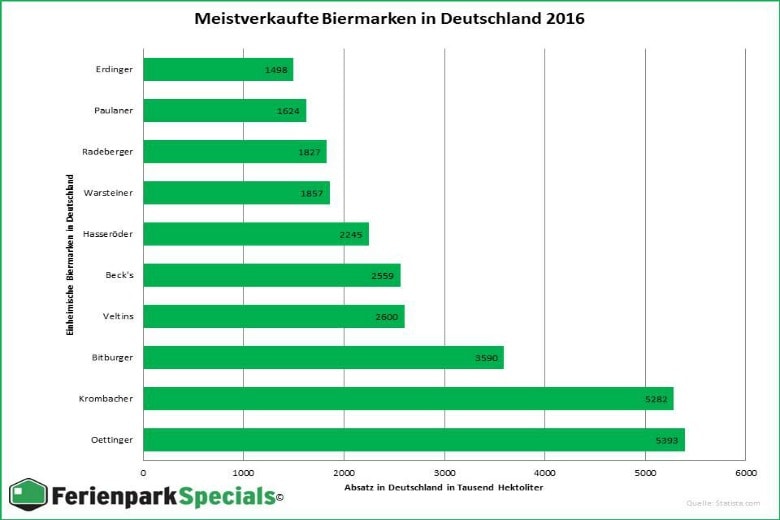 The graphic ** shows the sales in Germany (in thousands of hectoliters) of the respective common Beer brands in Germany at.Best-selling beer in Germany is surprisingly at the same timecheapest beer in Germany – Oettinger! TheBeer brand from Bavaria is often overwhelmed with abusive comments on the net, but wrongly. Various beer tastings without the beer brand being visible show that the majority of the test persons opted for the inexpensive beer from Oettinger. The reasons for the very low price per bottle (30 - 70 cents) are easy to explain: Oettinger completely dispenses with advertising and only buys raw materials in bulk. Nothing changes in the quality and taste of the beer. The Krombacher brand is also one of the bestsellers in Germany and is just behind Oettinger in second place. Bitburger follows in third place, albeit with a significant difference in sales. Well-known beer brands such as Veltins, Beck’s and Co. are among the top 10 beer brands in Germany.

A little addition for beer fanatics: the followingBeer world map ofVinepair.com shows the most popular brands of beer in each country, measured by sales. Have you already had the pleasure of trying one of these foreign beer brands?

Warning spoilers: the Dutch are loyal to their Heineken, the Irish continue to drink Guinness and in Mexico life seems to be best with Corona. 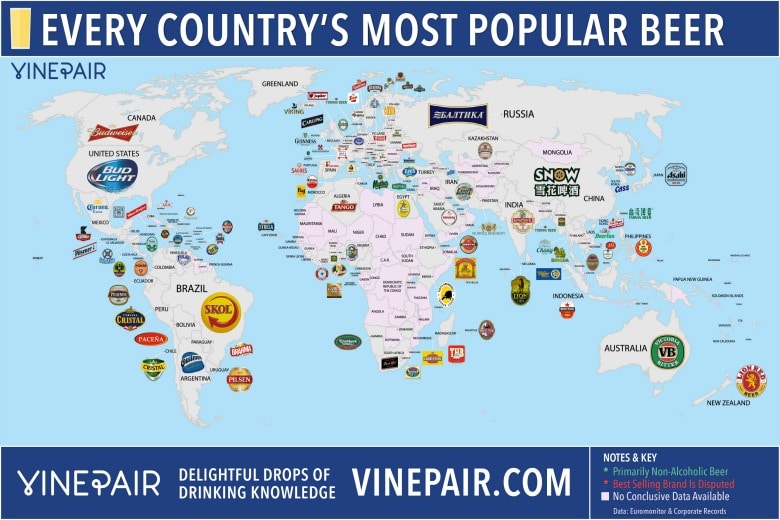 Now some people may be wondering where all the regional beers got lost. Of course, every federal state has its secret favorites. After a large-scale data analysis by market researchers fromYouGov.de were theFavorite beer brands of each of the 16 federal states determined. The Oettinger brand is sold evenly across the country, but the cheap beer brand is not a pioneer in any of the federal states. The east of Germany is dominated by the Radeberger brand, while the west prefers to drink the Krombacher barley juice. The private brewery Erdinger Weissbräu has the Free State of Bavaria firmly under control, while in Baden-Württemberg nothing works without the Tannenzäpfle. In Berlin, the Berliner Kindl and the Berliner Pilsner are fighting for supremacy in the capital, while the North Germans remain loyal to their beloved Beck’s. And of course the people of Cologne and Düsseldorf drink their Kölsch and Altbier in competition.

Do you fancy a Kölsch or an Altbier? So how about a short vacation to NRW? 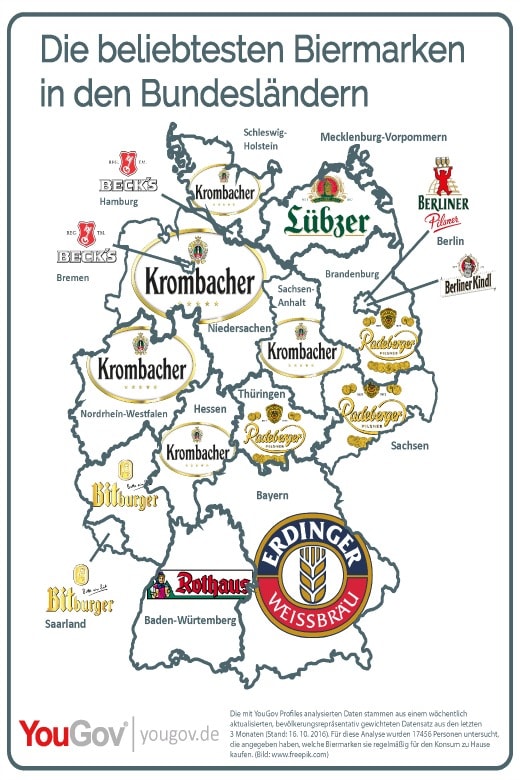 Which state are you from?

What's your favorite beer? Do you prefer a certain type of beer? Let us know your experience in the comments!

* VuMA (Consumption and Media Analysis Working Group). (n.d.). Ranking of the most popular types of beer in Germany (consumption at least several times a month) in Germany from 2013 to 2016. InStatista - the statistics portal. Accessed on August 28, 2017, from https://de.statista.com/statistik/daten/studie/171623/umfrage/mehrmals-im-monat-konsumierte-biersorten/.

** VuMA (Consumption and Media Analysis Working Group). (n.d.). Ranking of the most popular beer brands (consumption in the last 4 weeks) in Germany from 2014 to 2016. InStatista - the statistics portal. Accessed August 28, 2017, from https://de.statista.com/statistik/daten/studie/175766/umfrage/konsumierte-beermarken/.

The 10 best beers in Germany was last modified: October 8th, 2019 by Linus

Schrijf ever in ontvang net than 600,000 other than the first de best hotel deals 3 keer per week in jouw inbox.