Fought the United States in World War I. 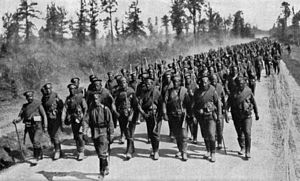 Russian soldiers on the way to the front, 1917. “Front” is the area where fighting is taking place.

The First World War took place from 1914 to 1918. Over 17 million people died. The war is called "World War" because it took place in several parts of the world. Above all, however, countries in Europe were affected.

On the one hand stood Germany, Austria and other countries. Their opponents included Russia, France and Great Britain. Germany, Austria and its friendly states lost the First World War. After that Germany had no more emperors and became democratic, some German areas came to other states like Russia and Poland. Austria-Hungary disintegrated into individual states and no longer had an emperor. Russia no longer had a tsar and became communist. 20 new states emerged, including Finland, Yugoslavia, Poland and Czechoslovakia.

Many people continued to suffer from the consequences of the war long after the war. They did not recover from their severe injuries. Many houses, roads, bridges and the railroad were destroyed. In addition, the Spanish flu spread to the western world. It cost at least three times as many lives as the war itself, 50 million people. That was true for both the vanquished and the victor.

The losers also had to pay the winners a lot of money in compensation for the destruction. After the war, some German-speaking areas belonged to countries with a different language. Politicians in German-speaking countries used both to get elected and it led to World War II.

Today there are still people who think of the dead from back then. Some states even have their own public holidays for this commemoration. It is customary for guests from other states to be invited, even those who were enemies at the time.

How did the war come about? 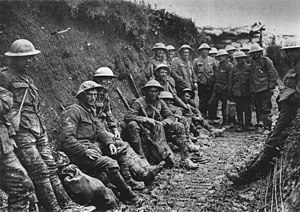 Soldiers from Ireland, which was then part of Great Britain. The photo was taken in France in the summer of 1916.

Many states in Europe had increased their armies for years. They were afraid that another state might invade them, or that it would at least threaten them. Some states had made alliances with one another and promised mutual aid.

On June 28, 1914, an Austrian prince was shot in Sarajevo. Sarajevo belonged to Austria-Hungary. The people there were very angry. The prince murderer was from Serbia, and it looked as if the government in Serbia had helped him. Austria-Hungary wanted to send its own police officers to Serbia to investigate the matter. Serbia said it wanted to take care of it itself.

How did the war go?

A German tank in the First World War

Germany and Austria-Hungary, and later the Ottoman Empire, stood on one side. On the other side were Russia, France and Great Britain, later also the USA and a few other states.

The First World War took place mostly on land and at sea, but not yet in the air. Warships fought against each other at sea, also the first underwater boats, called submarines. For the first time there was radio communication: the ship's captains were able to exchange information with the officers on land.

On land, the soldiers dug trenches to protect themselves against the bullets of the enemy machine guns. In order to destroy the enemy there anyway, poison gas and tanks were used. Airplanes did exist, but they were small, slow and low-speed. So it was easy to shoot them from the ground. They were especially important to find out what the enemy was like.

At first Russia was able to conquer parts of Germany and Austria-Hungary. Meanwhile, Germany wanted to quickly defeat France and then fight harder against Russia. But that didn't work because Great Britain supported France. Here in the west the armies were often only able to conquer very little land. One speaks of trench warfare or trench warfare. It was only with the support of the USA that France and its allies succeeded in recapturing much of their territory in the summer of 1918.

In the east, on the other hand, Germany was more successful. Since 1916 his armies have been advancing further and further into Russia. At the beginning of 1918 Germany, Austria-Hungary and Russia even made peace. Russia had to leave a lot of land and property to the Germans. Some new states were founded there, such as Finland and Ukraine.

The leadership of the German army had to realize that they could not win the war in the west. In September 1918 she recommended that the German government offer peace to France and its allies. On November 11, 1918, they signed an armistice: there was no more fighting.

What were the consequences of the war? 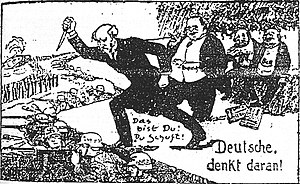 Six years after the lost war: With this caricature, German nationalists claim that the German Democrats are to blame. The Democrats did not support the soldiers enough and stabbed them in the back.

One in seven of the more than seventy million soldiers died. In addition, almost seven million people died who were not soldiers at all, that is, civilians. Many never recovered from their injuries. Women had lost their husbands, or children had lost their father. Most of them were poor and needed help from the state. Many states had almost nothing left themselves.

Most of the infrastructure in Germany, but also in other countries, was destroyed. By that you mean bridges, roads, houses, railroad lines and things like that. Shortly after the war, the Spanish flu killed three times as many people as the war itself.

Between 1919 and 1922 the states signed peace treaties. They originated near Paris. They are therefore called the Paris Suburb Contracts. Germany, Austria and Hungary were seen as the losers, especially here people rejected the treaties.

The new state of Poland was founded from large formerly German areas. As a result, Germany also lost many raw materials such as iron ore and coal. People were relocated from east to west and vice versa. In order to make reparation payments to the victorious powers, Germany printed money. But that lost value as a result, there was a terrible inflation. The Weimar Republic began for Germany.

Austria-Hungary was reduced to Austria. For this purpose, Czechoslovakia, Hungary and Yugoslavia were formed. The Ottoman Empire was reduced to today's Turkey. Above all, it lost areas in the south and east.

In Russia, the communists took power in 1917. They promised that the war and hunger would stop. A civil war broke out in Russia itself, between the communists and their opponents. Similarly, in other countries the wartime was not really over.

The winners were also often dissatisfied with the end of the war: for example, many Italians believed that they had not got enough new land. Some people in the world were suddenly against all wars, while others were in favor of new wars to take revenge. Still others wanted at least their own country to have a strong army in order to be better protected in the future. The dissatisfaction in Germany made National Socialism possible and was one of the reasons for the Second World War.

What do people think of the war today? 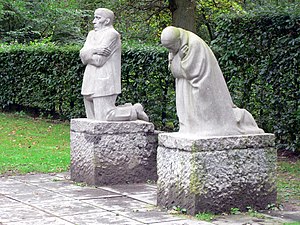 Mourning parents. Käthe Kollwitz made these statues. In 1932 they were placed at a cemetery for German soldiers in Belgium.

There are monuments in many states and places that commemorate the First World War. On such a memorial it is written, for example, who died in the town in the war. In Germany, for example, there is a day of national mourning. The dead are remembered on a specific Sunday in November. In other countries like the UK, France and Belgium, Remembrance Day is November 11th.

Historians know a great deal about war, but they still cannot quite answer some questions. For a long time it was believed that Germany was most to blame for the war breaking out. Now one takes a closer look at what other states did wrong. It also said: People liked to go to war in 1914. Now we know that for many that was not true. Most people were excited rather than enthusiastic.

In any case, historians agree that the war changed Europe and the world very much. It is even said that the First World War was the primary catastrophe of the 20th century. What is meant is: This war led to other accidents in the years that followed, to tyranny, murder and other wars.

There is also an article on “First World War” for beginners on MiniKlexikon.de and other search results from Blinde Kuh and Ask Finn.

The Klexikon is like a Wikipedia for children and schoolchildren. The most important things explained simply, with definition, many pictures and maps in over 3000 articles. Basic knowledge suitable for children, everything easy to understand and good for presentations in school.
<?