How can I stop cramps

How to stop muscle spasms before they stop you 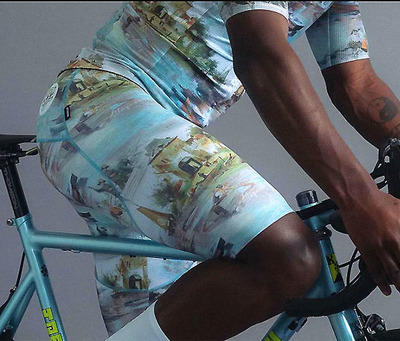 Even in chic cycling shorts, cramps can occur in the thighs and calves. How to avoid this, read here ... | Photo: Attaquer

01/17/2020 | Winter training on the bike: The temperatures are low, you sweat less. Then suddenly this slightly painful tremor - a sure sign of a coming muscle spasm ...

When it comes to cramps, there is no shortage of good tips among athletes.
Calcium, salt, magnesium, cucumber juice, bananas, even mustard or quinine (an anti-malarial drug) are recommended by some.

The Truth About Cramps: Although scientists have studied them for more than 50 years, they still don't fully understand the cause. It is known that some people tend to have them frequently while others remain almost completely free of cramps.
Since cramps occur more often in competition,
overexertion appears to be a factor; also that they are common in the hours after longer and harder training, and that diet may play a role. But when one is currently suffering from convulsions, this lack of clarity is frustrating.
In the following, we will try to demystify the problem of muscle spasms. And we'll give you tips on how to keep cramps from ruining your training and competitions.
Electrolytes are a major factor for many
for cramps, as they affect muscle contractions, fluid balance and nerve impulses. However, getting more electrolytes into your body is not that easy. sodium is a "key electrolyte" often associated with convulsions.
However, there is little scientific evidence that insufficient sodium intake causes cramps. One study compared 15 runners who developed cramps during a marathon with 67 others who did not have cramps. There were no significant differences in hydration or sodium values ​​between the two groups.
Also gladly mentioned in context
with muscle spasms being magnesium. It actually plays an important role in muscle contraction, and deficiency can actually lead to severe cramps. However, low levels of magnesium in the blood are rare. It helped in one study Ironman-Triathletes with cramps refrain from adding magnesium intravenously.
Although the consumption of potassium-containing bananas is often cited as an anti-seizure remedy, there is little evidence that it really helps. Potassium deficiency usually results from the use of some diuretics, persistent vomiting or diarrhea - not from sweating, which makes potassium less relevant to exercise.
Regarding sodium intake: Most people
consume more than enough salt; however, sweaty cyclists can be an exception. Sodium is especially important if you sweat profusely. A sweat loss of two to three liters (or more) can lead to a sodium deficit in a person on a low-sodium diet. Since sodium plays an important role in muscle contraction, the possibility of cramps cannot be ruled out.
To find out how much sodium to consume, try adding 1500 to 2000 milligrams to your normal daily diet for two weeks to see if it helps with cramps. Unfortunately, the concentration of sodium in sweat varies greatly, making it impossible to suggest more precise guidelines.
Don't worry about it
An increase in blood pressure: A moderate increase in sodium intake for a two-week test has no long-term effect on blood pressure. If you had no fewer cramps in the two weeks, obviously sodium deficiency was not the culprit and you should return to your normal ration.
Next tip: stretch. Calf cramps can often be relieved while riding by standing on the bike and pressing down on your heel at the bottom of the pedal rotation. For cramps in the front of the thigh, raise the foot towards the buttocks. Stretch by gently pulling inward on the foot. But be careful: in some cases, this can cause knee tendon cramps. Stretching can also relieve cramps that occur after driving.
Next hint: increasing your hydration
seems to work for some people - even if there isn't a direct scientific link to suggest the role of hydration in preventing convulsions. In any case, hydration is critical to all aspects of performance.
Last tip: drive within your performance limits if possible. Because - unsurprisingly - Overexertion can lead to cramps. So don't ride races that are too difficult for your current fitness level. A good rule of thumb for training: don't increase your mileage by more than ten percent per week.