How do emotions shape life

Self-awareness: The emotional profile that shapes our life

Lisa has a talent for intuitively "feeling" other people's feelings. She always waits for the right moment to ask a question and knows when the other person is not in the mood to argue with her. Lisa has a strong "social intuition". Others tend to have a good feeling for their own inner life, they are "self-aware", they perceive themselves precisely. And still others are particularly good at overcoming blows of fate: They are "resilient". But nobody is just "resilient" or just "self-conscious" or "socially intuitive". Rather, there are six characteristics that are more or less characteristic of a person's emotional style. At least that's what the well-known brain researcher Richard Davidson, professor of psychology at the University of Wisconsin in Madison, says.

According to him, our individual “emotion profile” consists of six dimensions: resilience, social intuition, self-perception, a tendency towards positive or negative feelings (“perspective” or “point of view”), context sensitivity and attention. Each forms a continuum with two poles, for example "recovers quickly" or "recovers slowly" on the dimension of resilience. The positions on the six dimensions indicate how one sees the world and how one reacts to it. The style is like a painter's color palette: everyone has their own mixture that determines how our lives are emotionally "colored". 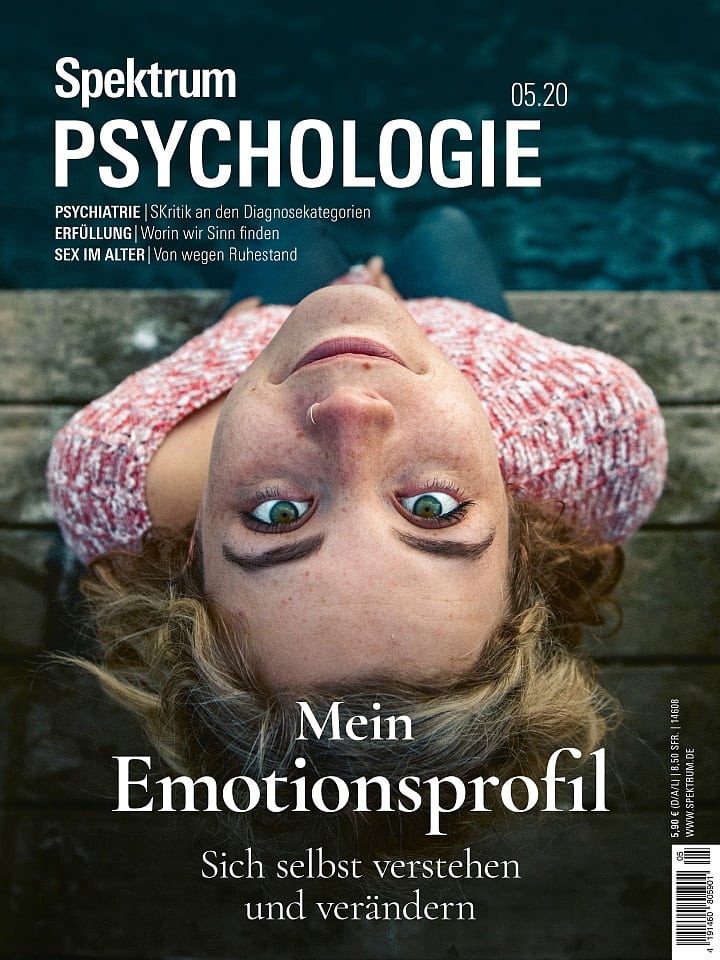 This article is contained in Spectrum Psychology, 5/2020 (September / October)

Davidson is not the first to formulate scientific models for the most important properties that characterize us humans. But most of the older models come from surveys and behavioral analysis, i.e. the observation and classification of reactions in different situations. Davidson's model is original in that it builds on how the brain works. For decades he has researched emotions using neuroscientific methods. The dimensions that he has found are all related to certain neural networks and corresponding neurophysiological building blocks of our personality. In other words: They can be transferred to biological functions more easily than the classic personality models.

Davidson came up with the dimension of "resilience" when he observed that people who get over strokes of fate at different speeds also differ in their brain activity. In a laboratory experiment, he aroused unpleasant feelings in his test subjects by showing them disturbing images, for example of a baby with a tumor on the eye. Then he recorded how quickly they recovered from the startle response of the eye.

What the blink of an eye reveals

To do this, he unexpectedly played them a note, which reflexively triggers the blink of an eye the first time - a kind of surprise effect. This blink of an eye is all the stronger, the more negative the emotional state of the person, regardless of whether they feel fear, anger or sadness. In this way, one can read from the strength of the muscle contraction what a person's emotional state is like. Davidson not only recorded the muscle contraction in the eye while surprising his test subjects with sounds, but also their brain activity.

Result: Those who quickly recovered from the unpleasant sight of the images showed more activity in the left prefrontal cortex, i.e. in the frontal lobe. The special thing about this region: it is practically closely interwoven with the rest of the brain and is therefore able to either inhibit or activate many other regions. Later, further experiments showed that this area of ​​the cerebral cortex in resilient people is closely connected to the amygdalae or almond kernels, which are particularly active in fear and other negative emotions. In resilient people, uncomfortable feelings apparently vanish so quickly because their left frontal lobe is very active and it can quickly calm the almond kernels.