How good is the Amazfit Pace Smartwatch

It is already visible from the outside Huami Amazfit Pace Delivered in an attractive cardboard box with a transparent plastic lid. In addition to the Smartwatch nor the 4-pin charging dock, a Micro USB cable as well as a operation manual.

China vs. US version

The Amazfit Watch is one of the few Xiaomi products that are also sold internationally. Next to the chinese model of smartwatch, there is also one Model for the US market is determined. In terms of hardware, both models are identical. There are only differences in the software, which is why the Chinese Amazfit Smartwatch only has a Chinese user interface, in which the language cannot be changed. The advantage of the China model is the regular updates. In contrast to the US model, this offers a much greater range of functions.

The model I tested is the Chinese version of the smartwatch. Because of the sheer software difference, there is already the option of one English custom ROM ("PACEfied") to install, the functionality of which corresponds to that of a Chinese Amazfit Pace. 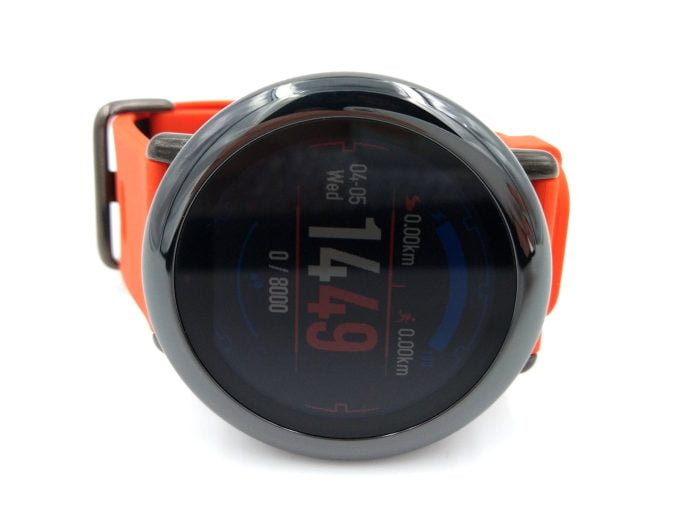 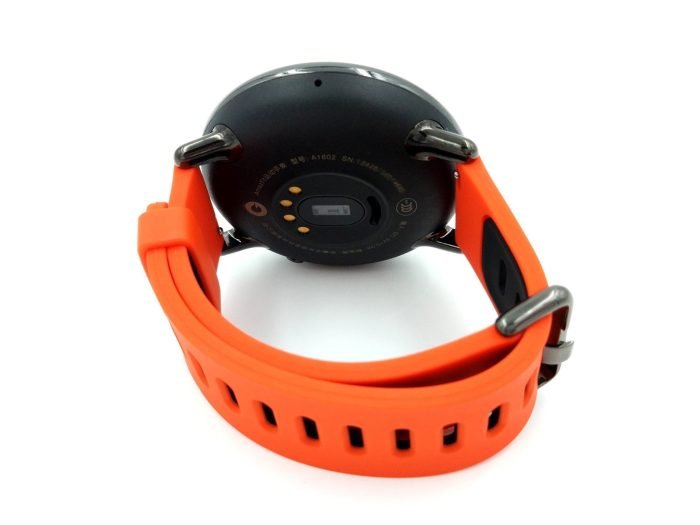 The Huami Smartwatch has a modern and at the same time high-quality design. The watch case consists of one part scratch-resistant ceramicwhich made the watch a proud one Weight of 55g confers. The back of the case is made of plastic, but optically adapts well to the ceramic. The striking red silicone bracelet is closed with a pin buckle and is adjustable in size by 15 steps. The bracelet is attached with a sliding clasp, which makes it easy to exchange. After Degree of protection IP67 the Huami Amazfit Pace is dustproof and even protected against temporary submersion to a depth of one meter.

The smartwatch is processed without any problems. The watch case has no gaps and the bracelet has no sharp or unsightly cut edges. 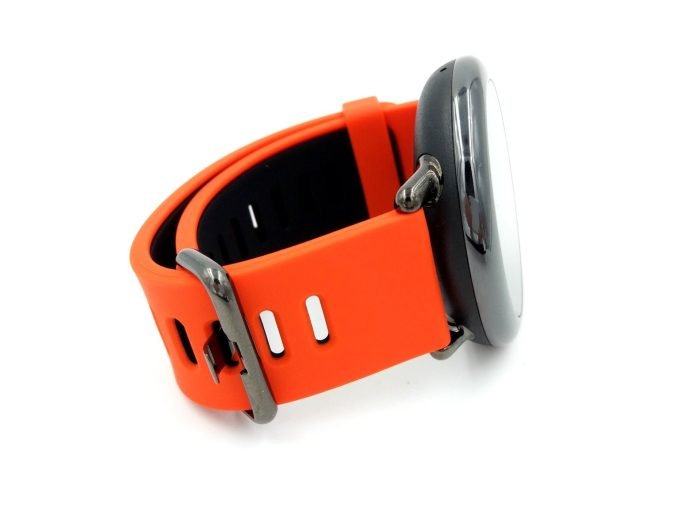 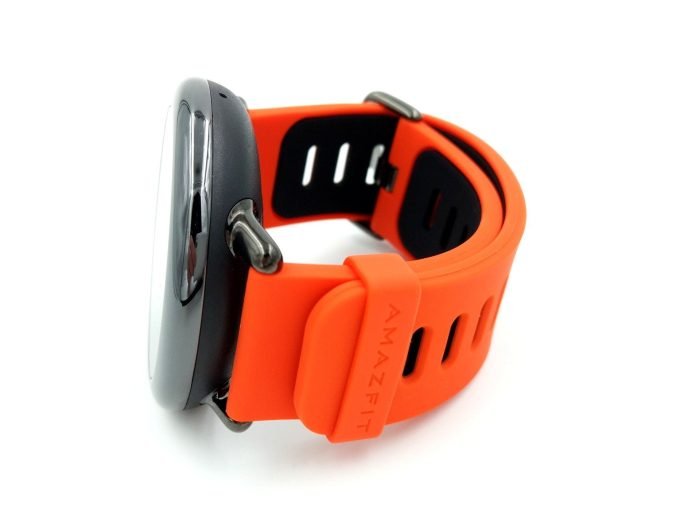 The display is a so called transflective color display with a diagonal of 1.34 inches and a resolution of 320 x 300 pixels. A transflective display is characterized by the fact that it can be easily read in direct sunlight. It is also interesting that the display is always active ("Always-On") and at the same time there is no loss of battery life.

The transflective display does astonishingly well in the test. The display is even easier to read in sunshine than in cloudy weather. In the dark or at night, the background lighting works as a support, so that the display can still be read easily under these conditions. A disadvantage of the display is the poor viewing angle stability. If the viewing angle is too steep, the display is less easy to read. What you also have to put up with are the sometimes pale colors that appear more or less strong depending on the incidence of light. The operation via the small touchscreen works well. Inputs and swiping movements were precisely recognized in the test. 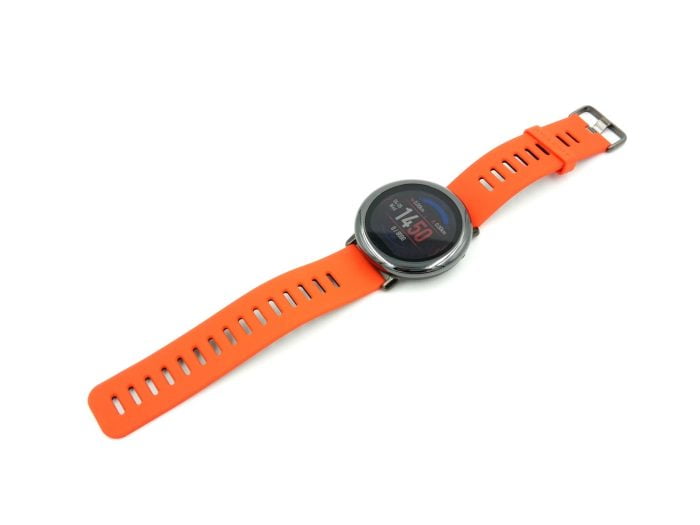 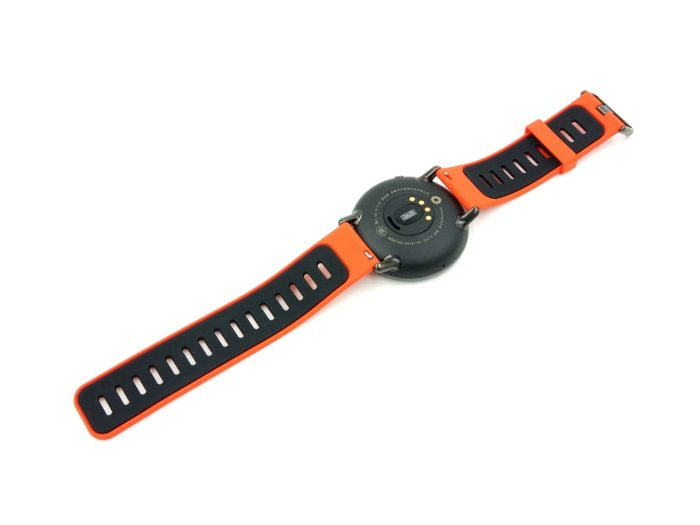 Few are known about the clock's internal hardware. The manufacturer only gives a few details about the processor. It is known that the 1.2GHz processor (Dual core) clocks. The memory configuration amounts to one 512MB of RAM and one 4GB internal storage. There is no memory expansion option. The system itself already takes up about 1.44GB of the internal memory, so that 2.56GB are available for other data.

The clock is addressed by cable via the 4-pin dock. This can be used to charge the smartwatch, but data can also be transferred in this way. The Xiaomi Amazfit is wireless with one 2.4G WiFi module and Bluetooth 4.0 fitted. Further equipment features are an integrated GPS module, a Heart rate monitor, a Light sensor and a barometer.

Commissioning is straightforward. After turning on the watch for the first time, a QR code shown on the display leading to Download the Amazfit Watch app leads. Alternatively, the app can also be downloaded directly from the Google PlayStore or for iOS devices from the Apple Appstore downloaded.

In contrast to the user interface of the Smartwatch, the app is completely available in English. A Xiaomi Mi account that you have to put on before connecting. Then the QR code has to be scanned again and the pairing via Bluetooth is fully automatic and only needs to be confirmed on both devices. 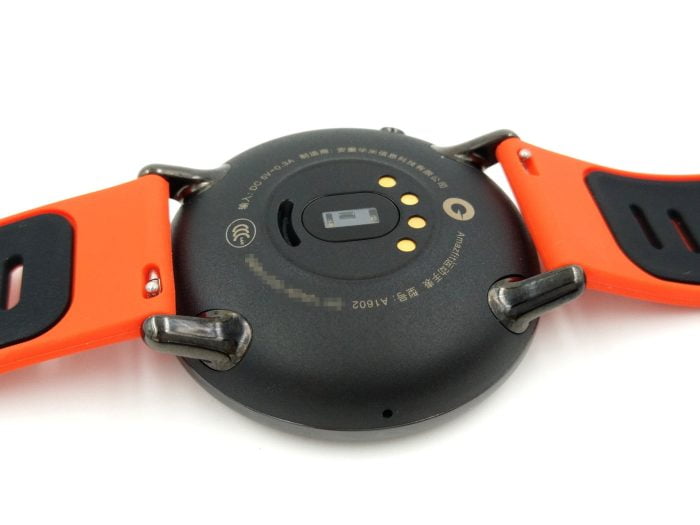 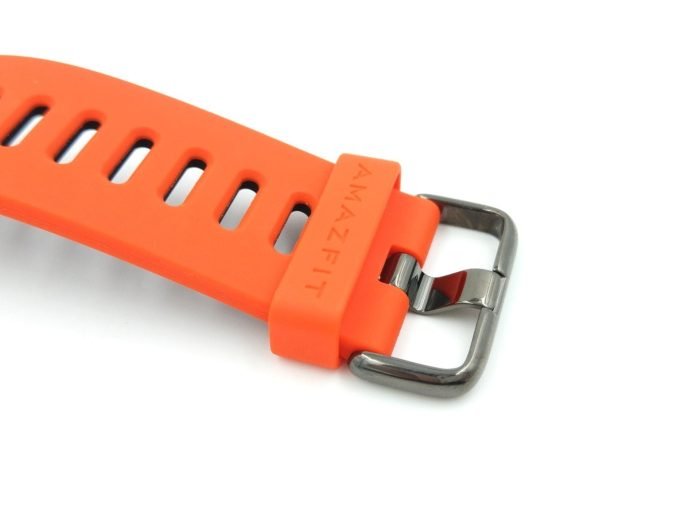 The Amazfit Watch app is, so to speak, the "Liaison Center". The battery status of the watch can be read via the app, watch faces can be exchanged and the collected data is synchronized via this app. Another function of the app is Notification management. This can be used to specify which notifications should be sent to the watch. Furthermore, there are setting options for icon management, i.e. in which order the small quick start icons are listed on the smartwatch, there are weather settings, such as for the temperature unit and the location, and it can also be determined which unit system is used. 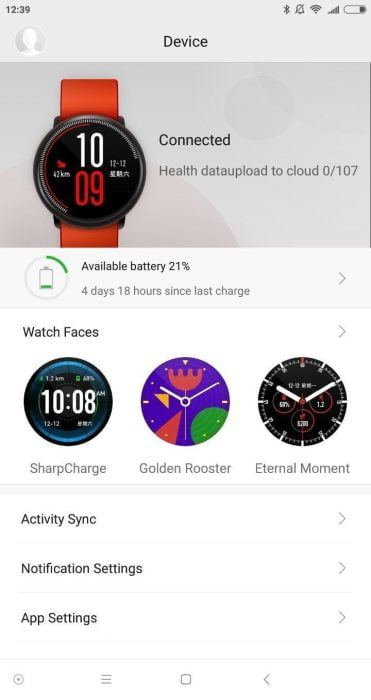 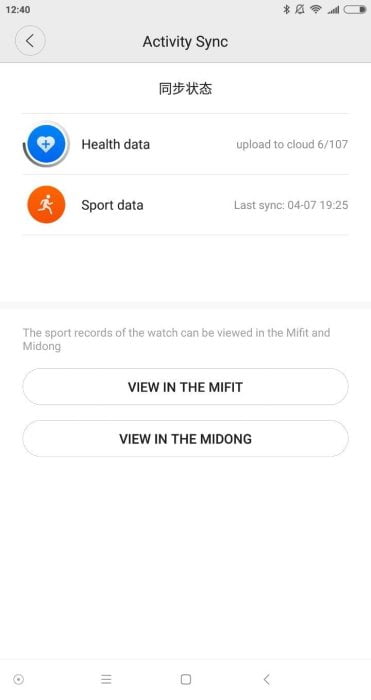 The Amazfit Watch app is not responsible for the graphic display or evaluation of the collected data. Here must be on the Xiaomi Mi Fit app can be used, which is also used by the Xiaomi Mi Band 2. The data collected by the Amazfit app is automatically synchronized with the Mi Fit app. A Transfer to Google Fit is also possible.

The fact that the Amazfit Pace Smartwatch is clearly designed for the sporty user can already be seen from the numerous fitness and outdoor functions. First and foremost, the pedometer with an individually definable daily goal is in the foreground. There are also several sports functions that can be activated depending on the activity. Overall you can get out 7 sports activities choose, whereby a separate profile is loaded for each of these sports. The Sports running (outdoor), walking, running (indoor), cycling (outdoor), cycling (indoor), forest running and running on the cross trainer. Depending on which profile you select, functions such as GPS are activated or deactivated. 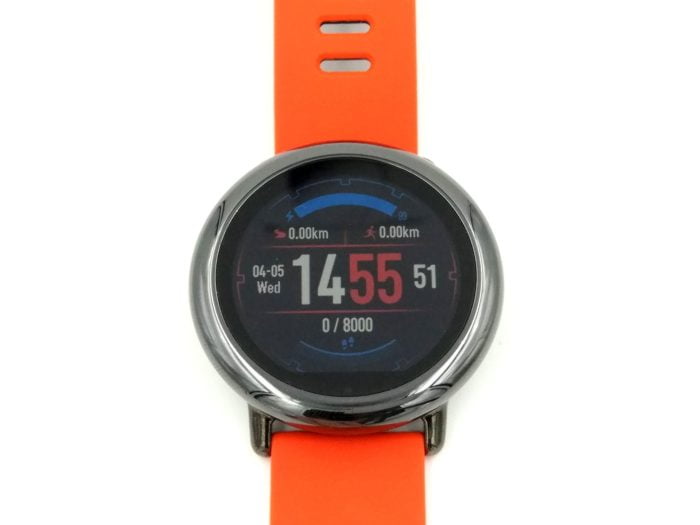 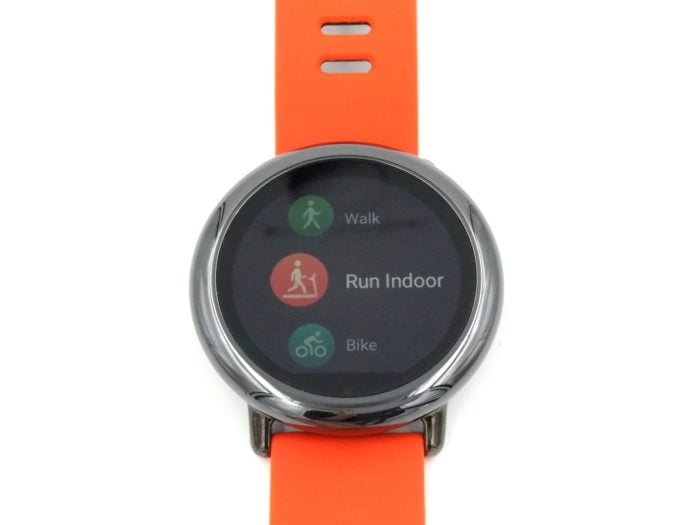 For example, if you select running (outdoor), the smartwatch waits for a GPS signal and then collects data on the distance run, the calories burned, the speed, the constant heart rate and the time required. The data collected for exactly this activity can then be displayed, regardless of the continuously counted steps. The Amazfit itself offers one for this Activity overview or you can look at the data directly via the Mi Fit app at.

The accuracy of the pedometer leaves nothing to be desired. Steps are accurately recognized and even when driving or doing office work there are no deviations due to incorrect measurements. Even if you take a break during an active sporting activity, this is recognized by the smartwatch and the stopwatch or the collection of data is stopped for the moment of the break. 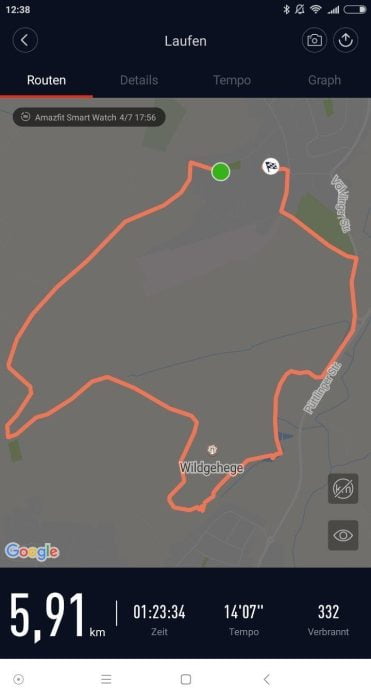 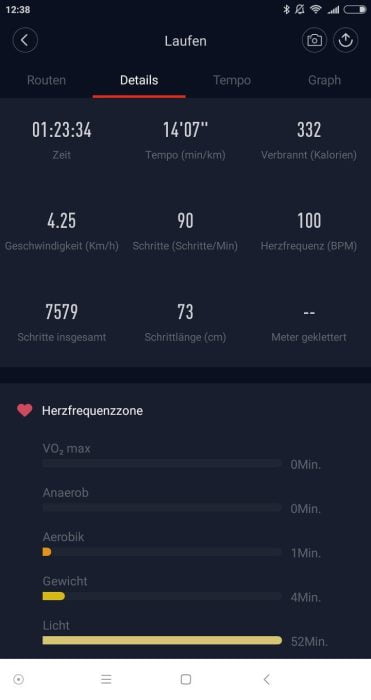 Like most other fitness gadgets, the Huami Amazfit Pace is designed for Heart rate measurement with a photodiode and an LED fitted. The blood flow under the skin, which is supposed to reflect the current heart rate, is measured. The accuracy of such sensors must always be viewed critically. However, the measurements distributed throughout the day during the test phase appeared realistic. Even the constant measurements during sports activities did not show any unrealistic deviations. The data collected on the heart rate can also be displayed in a list. There is also a warning function as soon as a limit value is exceeded.

The Sleep monitor the clock is activated automatically and cannot be set manually. Among other things, data on falling asleep and waking up times and the different phases of sleep are collected. The detection of sleep times worked quite well in the test. Nevertheless, after a few days I already gave up the sleep measurement, as it is quite uncomfortable to fall asleep with a wristwatch on. Here, thinner fitness bracelets have a clear advantage.

If you like to stay up to date with the weather, the watch has one for you 5 day weather forecast. The location is either received via the watch's GPS or the location is set in the Amazfit Watch app. Unfortunately, we don't know where the weather data comes from. The running route is also recorded via the integrated GPS module. The smartwatch finds a GPS fix within a few seconds. A E-compass is integrated and accurately reflects the respective compass direction. The compass can also be used to access the Measurement data of the barometer, where, among other things, the Air pressure and also the Above sea level are displayed. 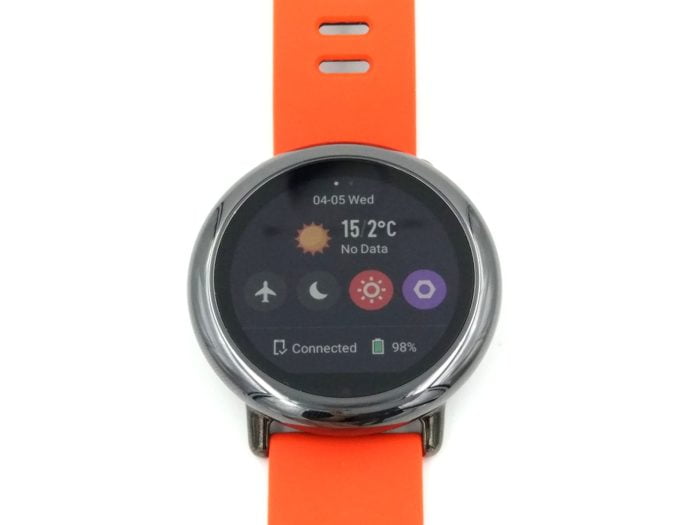 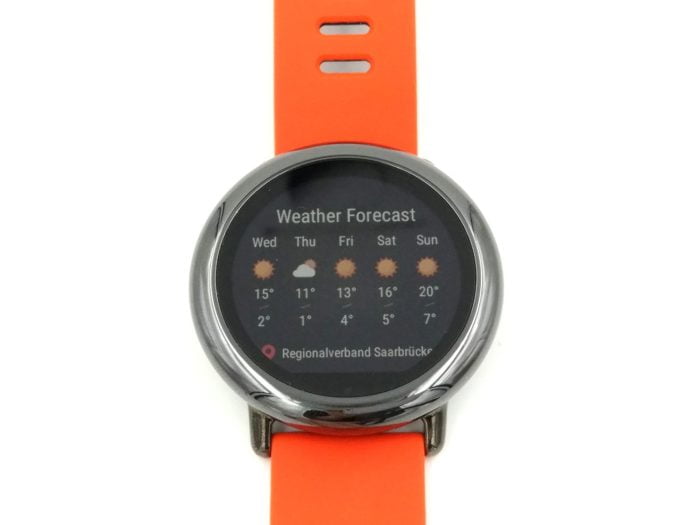 If you want to listen to music while doing sports, the Huami Amazfit has a suitable solution for this as well. Via an integrated Music player can locally saved songs via a connected Bluetooth headphones be played. An FM function is missing. This leaves only 2.56GB for music locally, which should be enough for more than 500 tracks.

The alarm clock is identical to the alarm function of a smartphone. Different alarm profiles can be set up and there is also a “snooze” function. You are woken up by a gentle vibration of the smartwatch. The mode "Training plan" offers training plans lasting several weeks (57 days) for beginners, but also for marathon runners. If you activate a training plan, you will receive daily instructions on how you should be active and which route you should run. 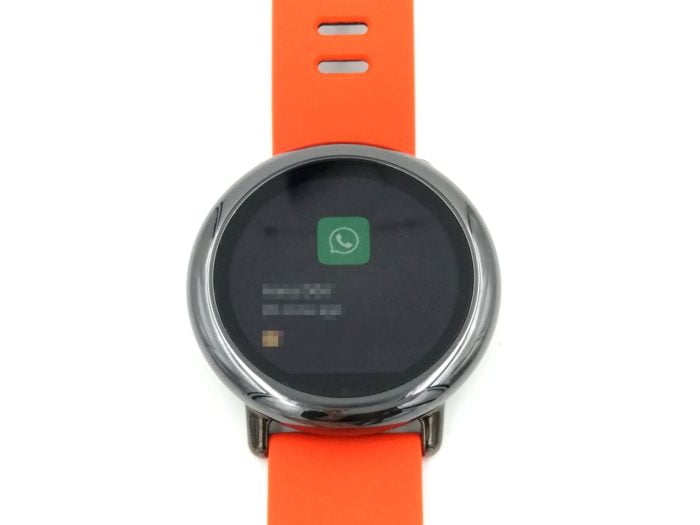 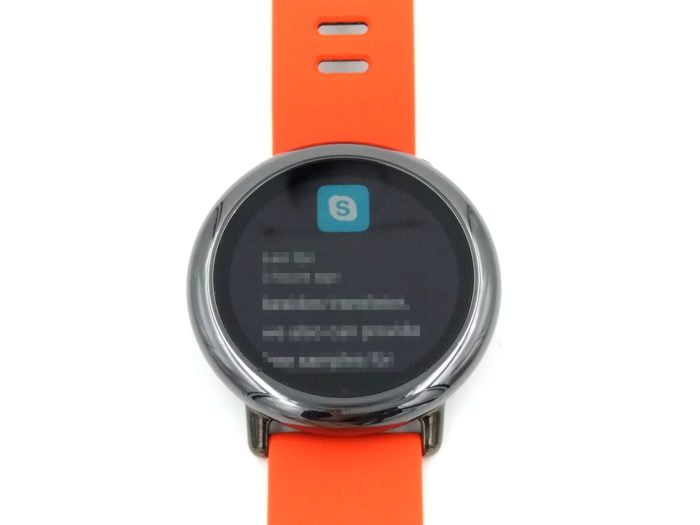 Overall are 19 watch faces pre-installed. These can be selected via the Amazfit Watch app or directly via the smartwatch. In addition to digital, there are also analog watch faces. Each watchface is different and has different displays of the collected data. For example, in addition to the time and date, the steps taken, the battery level, the calories burned or the distance can be displayed. In addition, it is possible to create your own watch faces and load them onto the watch via the Amazfit watch app. 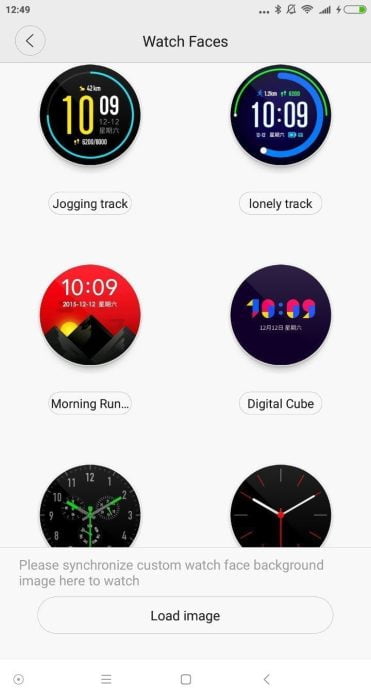 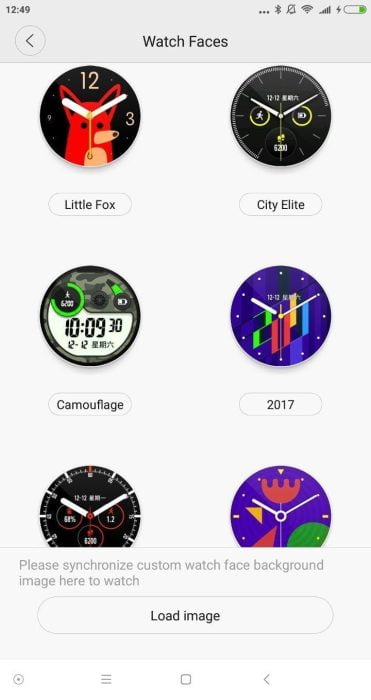 The built-in battery has a Capacity of 280 mAh. The smartwatch is charged via the 4-pin connector on the dock. Despite the comparatively low capacity, the Xiaomi Smartwatch achievedDuration of an average of 3 days. With little use, even 5 days were no problem for the watch. Thanks to the transflective display, the Amazfit watch proves to be very economical in terms of battery consumption. A full charge of the battery took an hour and 20 minutes in the test.

Would you like to know where you can buy the Amazfit Pace? In our price comparison we list the current offers from the most popular shops. All prices are checked and updated several times a day. If a shop appears several times, it is the dealer's various warehouses.

With the Amazfit Pace, Xiaomi and Huami are showing a fitness wearable that has almost nothing to complain about. The smartwatch offers numerous fitness functions and at the same time can be used very well as an everyday watch thanks to the modern watch design. Thanks to the transflective display, the smartwatch is not only easy to read in the sunshine, but also enables long-lasting battery runtimes of up to 5 days.

Because of the integrated WiFi, Bluetooth and GPS, there is hardly anything left to be desired in terms of hardware. The pedometer accurately records the distance run and the heart rate sensor provides realistic measurement results. One criticism is that two apps are required to connect the clock and read out the data.